Pulling her farm cart behind her through the gardens of Cloudbirth, Dixie hears the flutter of wings and the bright caw of a raven flying toward her. Zipp lands on the sash of her harness and sticks out her leg holding a small satchel containing a note from Cinnamon about apples….the apples! Oh no, she’d almost forgotten!

“Zipporah, please tell Miss Cinn I’m on the way right now!” With a little bob of her head the raven takes back to the sky and Dixie unbuckles her cart to offload her pile of wheat stalks into the windmill for safe keeping until she returns.  She whistles for Pine Nut and gives him a peanut when he flies down from the trees to land on the edge of her mostly- empty cart. Only a small jar of honey candies, a bag of bird treats, and a little string of silver bells that she attaches to the back of the cart…just in case the bigger taurus on the paths don’t see her.

“We’re going to pick up some apples from Cinnamon!” She tells Pine Nut excitedly. “Maybe I’ll ask for an apple instead of an obol…” the raven caws a playful chiding sound at her and Dixie laughs, strapping into the harness again and setting off for the Healers house.

It’s a lovely autumn day outside, and they’ve decided to go a bit of a scenic route, wandering through the tall trees and changing colors of Centauria. Dixie hums to herself and the bells on her cart tinkle and the breeze wanders through the trees, casting dappled shadows on the path.

But it’s another shadow that catches the pups eye, darting across the road ahead of her followed by a loud rustle of leaves. She stops short with a gasp, fur standing on end as she looks around.

“H-Hello?!” she calls into the trees.

Nothing.  So she keeps walking.  Everything is peaceful, through the canitaurs senses are on high alert now.

This time, the rustle is right by her flank in the brush and the shadow too quick for any normal animal as it moves away from her sight.

Again, nothing. Nothing but the thump thump of strange footsteps behind her, almost like something was……aiee!!

Dixie takes off at full speed with a frightened barking, causing Pine Nut to flap away from the cart and disappear into the trees in alarm as she gallops down the path to Cinnamons house.
Panting and trembling with tears welling in her big eyes she bangs her little paws on the door as she tries to wrestle out of her cart harness at the same time.

Brytestar wipes her face on her paws and smushes into Cinnamon, hugging her tightly. “Hopping Jack!!! He chased me! I was coming to get the apples and I was on the paths and he was following me I know it!!”

Lil Cinnamon: “Oh what!??? Nooo!!! are you sure????”  Cinn’s face gets pale. Peeks through the window. “I dont see… anything… but of course, every time I see something, nobody else does…”

Brytestar nods enough to knock her hat even more askew than running had already made it. “I’m sure, I’m sure-sure. I had lil bells on my cart and some candies and he musta knew it! I saw a shadow on the road, and- and…” Bryte stops to take a big breath…

Brytestar flops onto one of the furs and nods, finally starting to calm now that she’s safe inside with the healer.. “That sounds nice, Miss Cinn, thank you.“

Lil Cinnamon goes about to prepare a quick chocolate drink… “I guess I can’t send you alone out there with deliveries…. That will have to wait.”

Brytestar: “I saw a shadow on the road and then I stopped because I heard something in the bushes and I yelled for it to stop scaring me… but then I heard it BEHIND me… and it made a thump-thump sound like a bunny…”

Lil Cinnamon serves a cup with hot chocolate, adds a bit of sugar onto it and stirs it. “Here…” Offers Bryte the cup. 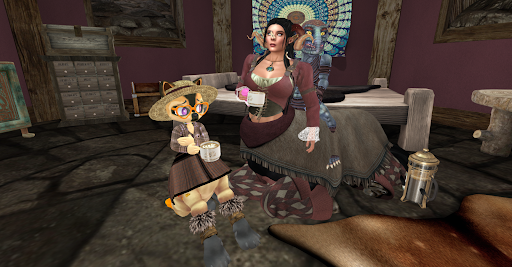 Brytestar carefully takes the cup in both hands and sits up so she doesn’t spill.

Lil Cinnamon: “Now that sounds like a Jackalope… Big thumps, dark shadows, yet nobody thinks it’s real… Of course I am not sure, but I have my suspicions…“

Brytestar: “I think he’s gotta be… I’m real, right? And I got changed by a fairy…“

Lil Cinnamon serves herself a cup as well. “Yes you did….some people would think fairies are all good, but some can be quite mischievous. Well, let’s wait for now…. I don’t want to send you home alone” Cinn peeks through the windows again.

Brytestar nods and scoots closer up against Cinns side. “Should we tell the Queen…? Or anyone?“

Lil Cinnamon: “We might need to tell the Queen. The ranger has been sending letters to her, with comments that suggest Hopping Jack might be more than a story after all… You know? I saw a shadow after Bard circle, the other day. But I think Ronald scared him away with his screams and cackles”

Brytestar: ”You saw him too?! Did you have any shinies or candies on you?! Maybe Ronald is good after all……”

Lil Cinnamon: “Not candies but….” suddenly occurs to look down at her jewel “I had this…” She holds her amulet.

Brytestar: “Oooh….”  She looks up, ears perking. “That’s definitely a pretty shiny… I’m glad he was scared away from you!“

Lil Cinnamon: “Maybe he is… Well I was lucky to have Ronald with me, if I could say so now…“

Brytestar blinks and looks up again, and she can’t help but giggle a little bit. “Miss Cin….is that a clothespin on your nose?“

Lil Cinnamon: “It is” giggles. “Quite effective against Ronald’s smells, hehe”

Brytestar: “He sure has those…….” she wrinkles her little nose up a little.

Lil Cinnamon: “Hahaha yes.. he does. Well… I don’t want to send you home alone, it’s gonna get dark soon. So what if I walk you home? Don’t worry about the apples for now. Maybe another day, during daylight. And I will send a note to the Queen, telling her about what happened today, if that will make you feel a little better”

Brytestar sniffles a little bit and nods, holding the warm cup in her paws. “It would make me feel better… if he’s chasing people we all need to be careful… If you wouldn’t mind walking me to the windmill…?“

Lil Cinnamon: “Of course not!”

Brytestar shakes off a little bit as she stands. “I’m so glad you were home…“

Lil Cinnamon: “Hey birdie!! … listen Zip, we need to send a note to the Queen… Me too, Bryte…. let me just send the note and we’ll go on our way”

Lil Cinnamon takes parchment from her desk and a quill, and writes quickly.

I shall inform you about a small incident that happened to our courier Brytestar on her way to my home, to pick up a delivery. Apparently she saw a shadow among the trees, then again a couple of times further down the road, and when she tried to scare “it” off, she heard big loud thumps right behind her. The poor puppy ran off scared, luckily she was close to my home and I got her safe inside the house. Turns out she had her silver bells (the ones she carries around to be heard around the roads by the big taurs), and a few sweets on her cart.

I know it might sound silly, but maybe the Hopping Jack myth is not quite a myth after all. Candies, shinies, … and we are getting close to Samhain. May I suggest the ravens to keep an eye open

Cinn folds the note and tucks it onto Zipporah’s pouch. “Off you go, Zip…. oh and hey…. if you happen to see… a black jackalope with a pirate hat and a patch in one eye… please let me know”.

Lil Cinnamon: “I am sure he’s fine, just scared maybe… up in the trees is safer if there’s really a hopping Jack……. We’ll whistle for him on our way to the mill.” Cinn sends her raven away. “Alright, let’s go!”

Lil Cinnamon watches Bryte strap her cart on. Then looks left and right. “Nope… no jackalopes…”

Brytestar buckles all the straps. “Good to go!“

Bryte and Cinnamon walk together from her house towards the Windmill in Cloudbirth.

Jinx Fantasy Creatures is the home of the Bento Centaur. Many magical creatures and critters.