Queen Herouin raises her head, sniffing various scents carried to her on the crisp fall wind. The leaves rustled around her long legs as she lay near the garden beds in the back, Herouin sighed and smiled, softly clipping the plants back in readiness for the colder weather coming. Maybe next week she will brave the market. A strange scent catches her off guard and she stills immediately, shifting to look behind her she thinks she saw some..one?… dart away along the bank. Shaking her head she eyes her special plants glowing softly, safely hidden near the dock. She makes a mental note to take a nice evening walk later…

The ranger has noticed a new raven on the hill… this one seems different… somehow, more intelligent than normal… he goes to the top of the hill to welcome the new arrival but at the moment he reaches the top, the new raven looks directly at him and takes off… the ranger doesn’t know what to think of this behavior since none of the other ravens have ever shied away from him before… still, there is something about this raven…
—

MaeSinnach wipes her brow, clearing sweat after pulling fresh baked goods from her ovens. Her bowl of peppermint candies sat on the counter in the open, waiting to be crushed for brownies. Looking out over the water, the hairs on her arms and the back of her neck begin to stand on end. Turning her gaze slowly toward the Roonwit woods, she squeals and jumps when a raven bursts from the trees, swooping directly at her flying hell for leather. Bolting down the hill from her outdoor kitchen, she is almost into her house when Kangee lands just inside the open front door.

“Kangee!” Mae gasped, “You scared me you bloody bird! What’s going on?”

“A strange raven is close? To here? To the kitchens? Is it the same raven you mentioned at market?” Mae’s eyes widened in concern, staring at her companion.

Kangee bobbed his head in ascent. Mae hurried over to snatch up a piece of parchment and her quill, scattering ink drops across the page as she scribbled out a quick message then sanded it, making sure the note is legible before tucking it into the pouch at Kangee’s leg.

“Take this to the ranger quickly. And Kangee, be careful. Come straight home after.”

Deciding the rest of the baking would just have to wait, Mae began to settle in front of her hearth, hands shaking as she began to prepare tea.

The note reads Rayven, Kangee has just reported the strange raven hanging out around the kitchens again. I have a feeling it’s not a friendly visit, and no messages have been brought. -M

Ronald is finally off-duty from being Cinnamon’s shadow. A visibly cleaner and much-more-polite-than-before goblin makes his way off back to the Queen’s castle. “With the amount of chores that the Queen has been giving me these last days, I hope she’s reassured about my service. And Ronald, I am so proud of you, you have learned manners! We got over the nose picking and the loud farts. I am sure Queen Julala will be pleased to know that now you take showers every day. See? Water and soap are not so bad, really. I hope Grizzle learns something from you!” Cinn said to the goblin before sending him off back home.

Cinnamon is finally resting for the afternoon, after checking everything off in her list for the upcoming celebrations of Samhain in Centauria. “Decorations for the Halloween party, check… Repair the candy cauldron, check. Place treats around the roads, check… Place tricks around the roads… double check!!” Cinn smiled to herself. She’s been hearing the tiny hooves of the foals coming and going on the roads all day, as well as their laughs, as they’ve surely been scavenging for candy. Earlier during the day, she couldn’t help but laugh about the trail of glittery hoof prints near the bridge over Thessaly, and wondered who made the glitter bomb go off. All in all she’s happy with the results of her efforts, the taurs are having fun, and to finally relax for the afternoon, she decided to place a kettle by the fire to warm up water for some tea, then take one of her books and plop by the pond to read some, with a bowl of leftover candy by the side to munch on.

Zipporah had gone on duty all morning, flying and observing, as the Queen requested. Nothing out of the ordinary, apparently. The sun was setting and the white raven was grooming herself on her perch right outside Cinnamon’s house. “Cawww… caww??” Zipporah asks. “Of course, Zipp. Go see Poe. Since you are going to the Hill, would you please ask the ranger how is he going with my order of brandy? And remember to keep your eyes open for oddities on land! And be safe!!”. The bird nodded and took off in flight.

Minutes later, the kettle started to whistle softly. Cinnamon popped another piece of chocolate in her mouth before standing up and going back inside the house to serve herself some tea, leaving her book and the bowl of candy by the edge of the pond. Not too long after, a soft clinky rattle sound came from outside. “Huh?” Thought Cinn, as she stretched her neck just enough to peek through her open door. And what she saw made the hair in her arms raise in goosebumps. A black figure, tall pointed ears, and dark polished antlers on his head, seemed to be kneeling by the pond, right in the spot where she had left her book and her bowl of… “…Candy! HEY!!! YOU!!!”. 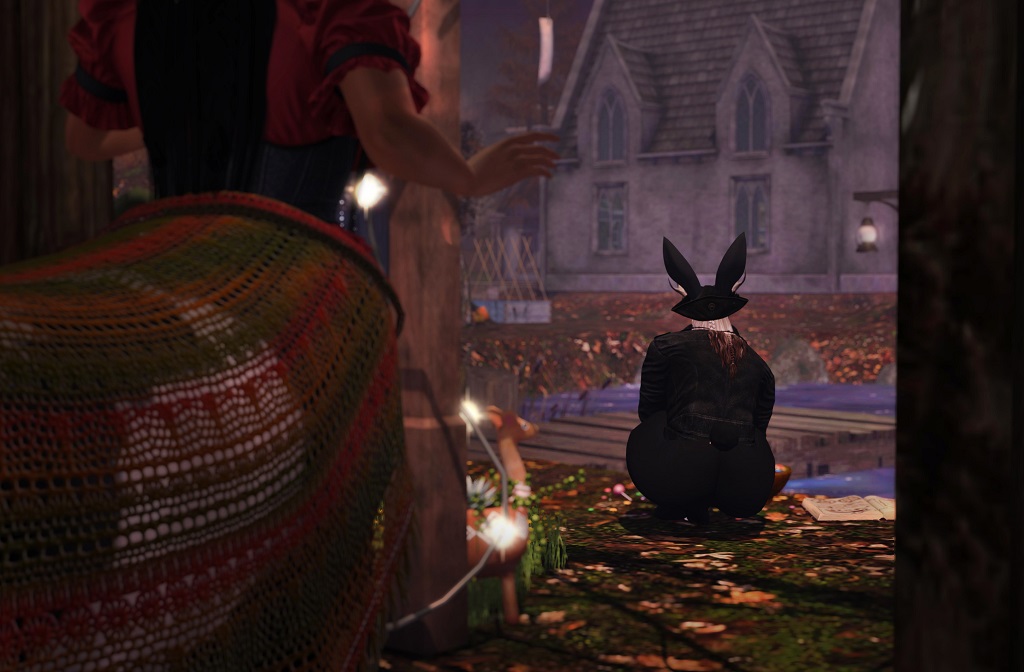 She yelled and gave a step towards the door, and with that, the dark figure instantly turned his face around. A single eye of agate glared at her and then she heard a metallic “clink”, followed by an arm, quickly raising and pointing something at her. 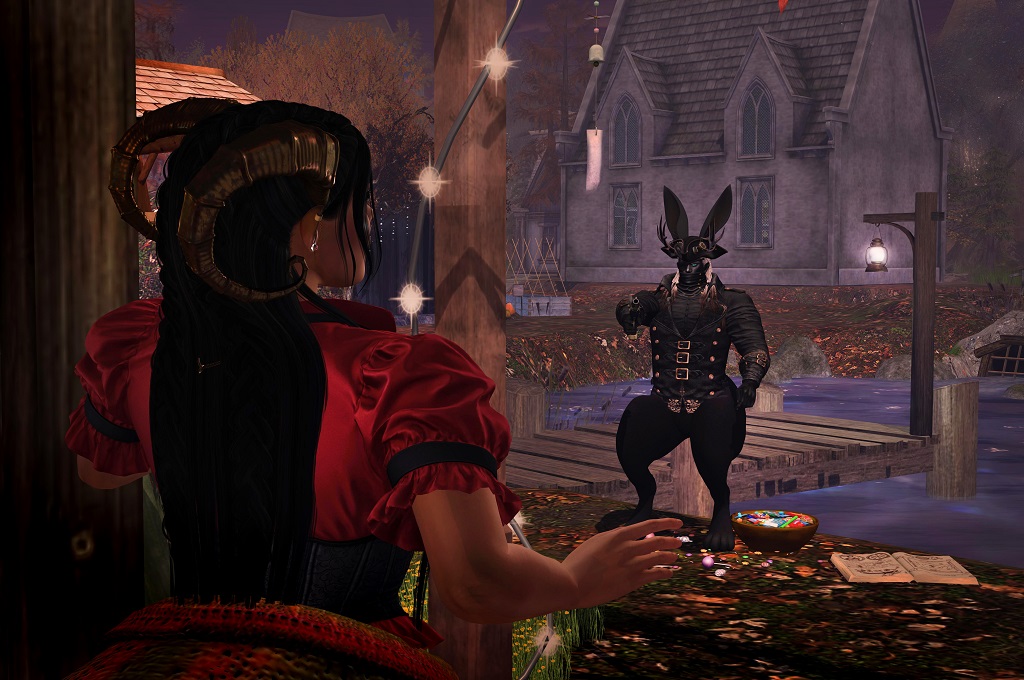 The healer’s skin went pale, eyes wide open. She wouldn’t move a finger, nor the dark figure. In an instant, a loud croak came from the trees, startling both Cinnamon and the mysterious figure, and they bolted, one towards her bow leaning against the wall, and the other towards the darkness of the forest. Cinn tried to give chase, but as soon as she stepped outside her door, there was no one. “STOP RIGHT THERE!!!”. She yelled at the darkness, running towards the spot, and bow at ready she pointed around, and then left, …and right.

The figure was gone and nowhere to be seen. She huffed in frustration, and pointing up at the trees, to where the noise had come from, she realized that… a not so familiar crow, perched on a tree nearby, was staring at her. She stared back at it and mentally asked… “Who… are you?”. The crow didn’t answer, but calmly took off in flight and left… and the healer lowered her bow, following the mysterious bird with her eyes until he disappeared in the distance.

“There goes my relaxing afternoon…” Cinnamon thought to herself, picking up the book from the floor, and what was left of the candy, scattered on the ground as the bowl tipped when the creature got startled. “I need to report this to the Queen, and I might just sleep with a dagger in my hand tonight, for Chiron’s sake! This is getting odd, way too odd…”