The House of Glenstorm are known for their strength and power.  Both the Centaurs and the Centaurides (females) are built with brawn and hungry for battle.  Their strengths are their sheer strength and their determination and drive to win the battle or reach the goal.

They are known to be brusk, loud and a little crude at times but ultimately are creatures of honour, integrity and loyalty.  It has been said they don’t have much of a sense of humour but perhaps those that say this haven’t seen the Glenstorm after they’ve been frequenting the ale house!

Glenstorm are “doers” and “go getters” – they enjoy rising to the challenge and will often make projects out of nothing.  They make good leaders but also good followers when they have respect for their leader, they like being part of something more than themselves.  They are very much for living in the now and enjoy the weather, whatever it brings. 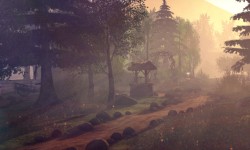 Home of the Ancient Order of Centaurs - a pretty location for centaurs and other hooved creatures and their friends to hangout and relax, take photos, and enjoy.