Lil opens the door and walks in the Healer’s hut “Alright.. sit down Ray, let’s check that wound”

Rayven Firebrand removes his dressings and sits “See, it is closing, really fast”

“Alright…. lessee…..” Cinnamon grabs the old dressings and puts them aside. Rayven Firebrand removes his vest.

“Have you been feeling anything weird? other symptoms??” Cinnamon touches the wound slightly, making sure there’s no infection.

“No. Just tired a lot lately” he replies.

“Well, that’s understandable”, she stands up and gets cleansing tonic, wets a clean rag and passes it over the scabbed wound. “We will use the poppy seeds for your pain, I’ll make you a medicine”

“Alright, carefully……” She tries to be more gentle….. very carefully rubs the skin around it…. a bit of dry green … “something” is left on the cloth “Hmm .. interesting”

“You know Ray…. I think your wounds were sort of… defending themselves against the curse… This green stuff is “within” your wound, did not come from outside…. But it’s dry now, as if it has done it’s work”

“Maybe how I made it home in the first place”

“Maybe…” Cinnamon keeps cleaning until all the green is mostly gone, and only the scab is left. “It will be interesting to see what your blood does when there’s a curse or a poison on it… have you ever been cursed before?” She stands up and gets clean dressings. Then starts wrapping the wound in a new clean bandage. “You know… one thing is a blade… but another one is a cursed blade in your bloodstream”

“Do you have any theories on why my wound reacted like that?” asks Rayven

“Well… two… one as uncertain as the second one…” She smiles apologetically. “If you have never been cut with a cursed blade… maybe this could be your reaction to curses” She shrugs. “Or… you are just naturally resistant to the darkness, but that is a very long shot to be honest”.

“Your uncertain theories are better than mine not having at all. This is definitely my first cursed blade.”

Cinnamon nods and thinks… She rubs her chin. “You know what?… Mind if I keep these?” Says lifting up the dirty dressings. LiL Cinnamon lifts her eyebrows… “Do you remember exactly what happened after?”

“Keeps me from having to dispose of them. If they are of use to you, by all means you can have them.” answers Rayven. “When the dark mage tried to turn me in the more “conventional” method, nothing happened. Aside from the fact that he became visibly angry at his failed attempt, yet somehow he wasn’t really surprised. As if he expected it”

Cinnamon replies “Yes, they will help. And that creature… well Ray, you might not remember as you were very young but… dark creatures had two choices, either they turned you, or they killed you”. 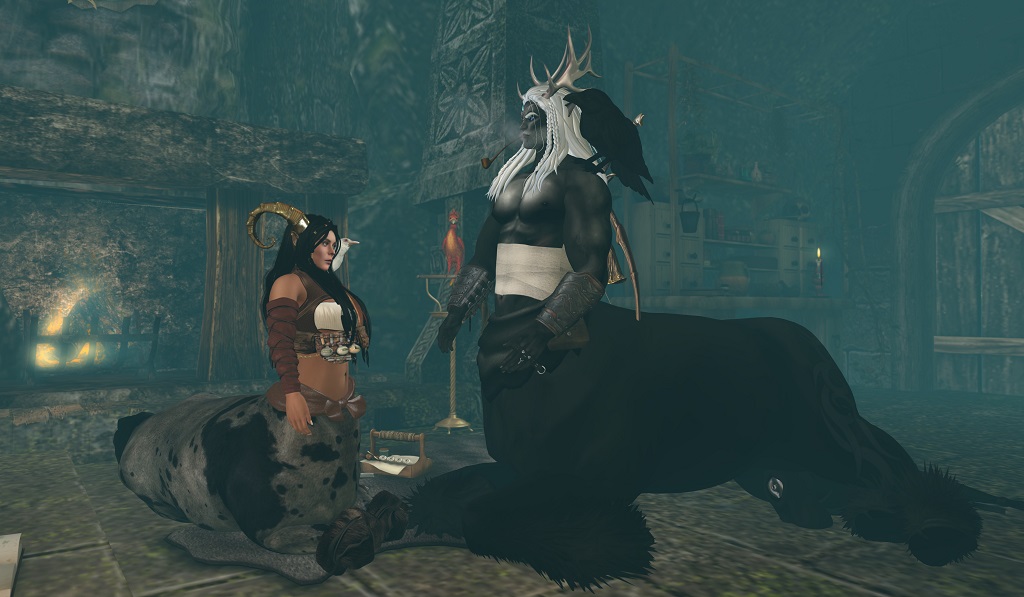 “Very few were abducted and kept prisoners, tortured for Vitrollia’s pleasure, but that was the exception… If she or any of her subjects weren’t willing to turn to the darkness and serve her… they were killed as they were no use for her at all” Suddenly, a painful memory comes back to her mind, but she dismisses it instantly. “If you …are resistant to curses, you are probably resistant to the darkness… no wonder why they tried to kill you… But I will need to study your blood to confirm that.. which reminds me…”

Cinnamon gets up for a syringe… “alcohol…. syringe… vial…”

Memories from when he was but a foal flash in Rayven’s mind.

Cinnamon takes a rag and wraps it around Rayven’s arm…. “Make a fist“.

LiL Cinnamon ties the rag tightly and waits for the vein to show.

“Man, it’s hard to see your veins with this skin” says Cinnamon, narrowing her eyes. Carefully disinfects the area, then pierces the ranger’s skin and starts extracting some blood…

Rayven chuckles… “The skin of midnight that goes to eternity.”

Cinnamon smiles at him as she fills up one vial…. “Good. One more…” She fills up the second vial and puts the cork on. “Alright, all done”

Rayven says: “Now, I am going to get that back, right? Just kidding.”

“You can” She laughs. “Don’t you worry, I am sure you will produce more to replace that”

Cinnamon places a little cotton ball in the small wound. “Hold your arm up” Says as she unties the rag.

“You are good to go, Sir. Oh your medicine!”

“I have been cut before in battle and it never stopped or slowed me down before. This blade however felt like white hot steel”, Rayven puts his vest back on.

“Well… even in an ideal situation, Ray… if you have resistance to curses, one could be able to reject them… but there is always a limit… otherwise you’d be immortal. I imagine it took all your strength”

“Let me analyze your blood, and um… will use those rags to see if there’s any poison left on them… if not, I’ll manage to produce something to make a few tests”

Rayven says “The thought of my family and Dove are the only things that kept me sane.”

“I will do what I can to find out what… what is that you are” she nods… “Emily was hurting so bad while you were away… And Dove, she loves you dearly, that girl took care of you all night while you were unconscious”

“Well… whatever those tests result on… I think you are extremely strong, Ray. You are unique. Whatever I know I will tell you, you have my word.”

“Let me work on your pain medicine and I will send Zipporah with the vials at your door” she says.

“Zipporah will definitely know how to get to the hill” says Rayven.

“Do you need help getting home, Ray?”

Rayven chuckles… “Unless there is more you need, I must away. No, I know these roads and Poe will look out for me”

“Alright, take it easy, you are healing really good and I am pleased to see it”. Cinnamon walks Rayven to the door.

Rayven Firebrand pounds his fist across his chest… “Until next we meet, Cinnamon”

“See you Ray” She waves the ranger good bye.

A couple of hours later, Zipporah lands at Rayven’s windowsill. Attached to her body is a small pair of saddlebags, that carry several vials and a note that reads “Rayven’s pain medicine” and signs “Cinnamon” on the lower right corner.

Rayven takes the vial and offers Zipporah some carrion as thanks for the trip.

Zipporah takes the treat excitedly from Rayven’s hand, rips of a piece and munches, takes the rest with her beak and flies back home.

Cinnamon was planting an ivy at the entrance of her new hut in Thessaly.

“I do! If they grow from seeds I will have to collect some!”

“You are very welcome to get some cuts from these” she smiles. “Just rare seeds one finds here and there”

“Oh yes, that would be lovely. I will just take a little snip.”

“Mhm mhm… some water and some love and it grows sparkly like this. Oh Kumi… do you nave some time? I wanted to talk to you about Ray”

“Well… like I mentioned before.. when he was injured, we used these rags and they were all left covered in blood and that green…stuff he had on.”

Kumi nods “Yes I do recall that.”

“So I was wondering if you.. being so good as you are, at magic.. is it possible at all to trace a curse? My theory is, the green glow was coming from him, as a defense mechanism. For how his wounds looked like… But… it took all his strength and, for what we could see… kept him alive.. barely alive. He’s so eager to know who he is, his origins, where he come from, WHAT is he, do you understand me?”

Kumi shakes her head sadly then looks into Cinn’s eyes “You did such a wonderful job of saving his life, he’s such an important member of our community.”

LiL Cinnamon nods silently and looks down at her hands “I feel it would be a gesture of appreciation and love… to help him in his quest. I feel we owe him”

Kumi nods in agreement “I would help him at any rate, yes I will do what I can to help him find the answers he seeks.”

Cinnamon smiles at Kumi “Oh thank you, Kumi…. I think he will be happy to hear that we can do something more, show him more. If it’s good with you, shall I send him Zipporah with a note? to say we’ll come and visit you? I will need to go pick up the dressings and his blood vials, from the healers’ hut. They are stored under the ground to keep them as cold as possible”

Kumi nods “That is good, the fresher the blood the more clear the visions. I need Rayven to tell me he wants this before I do it, I don’t want to force anything on our taurs.”

“I just got the blood one or two days ago. And yes, it’s better if he tells you directly. Alright, I will get to it and send him a scroll. And thank you again Kumi!! He will be so happy to hear this!!!”

“I just need his permission, you know. In case he hears something he doesn’t like and runs to the Queen. I never want to anger her.”

“Right. Do what you need to do” Cinnamon nods in understanding.

“Oh I do hope so, I am happy to help where I can. I hope that it works, you know, sometimes it does not the first time.”

“Yes… I hope it does. Alright. Need to head out again…. those amulets are not gonna make themselves!!”

“I added one this morning, and a sword as well.” Kumi stands and prepares to go clean her scrying bowl

“Me too! … gathering is the longest part… walk walk and walk. Good for my legs though, they are getting old by the day” She sighs as she shakes her hind legs to wake them up. “See you later Kumi, hun!! please take some ivy! I’d love to see your treehouse covered in sparkes! haha”

Kumi smiles warmly “That I will do!”

Cinnamon giggles “Take care!!” and walks back to Centauria

Cinnamon takes out a piece of parchment and writes a small short letter. At the top reads “To Rayven”

“Hello Ray. I have talked to our Roonwit druid Kumi, and she agreed to have us, to try and, with her magic, and through the objects I have, find out more about you and your origins. I need to go back to the healer’s hut to pick up the dressings and the blood, and if you agree, we can go pay her a visit. It will have to be soon, as energy wears out in time, and your blood is still fresh. Send me word, of when we can arrange the visit.

She rolls the parchment up, goes outside her hut and with a loud whistle calls her messenger. Zipporah lands on her perch, Cinn ties the parchment up to Zipporah’s leg. “Hey Zip… remember our big friend, the black one, blue eyed, with the antlers?. Yeah, this letter is for him. Don’t you get distracted!! Straight to him and back” CAWWW CAWWW!!!! Cinnamon, covering her ears, she replies “Alright! Alright… Gee, alright!! Go hang out with Poe! and yes, you can have snacks”. She rolls her eyes and goes about gathering ingredients again.