Rayven returns home with much difficulty as he is bloody and wounded from battle… collapsing on his mother’s living room floor he gives out a fierce cry from the sudden intense pain that is so loud that even the gods stir then all is silent… something is not right… something dark is happening.

Emily startles at the sound her son made and rushes to his side “Ray! Son…you need a healer!” She sits down next to her son and runs her hand over his blood-soaked hair “Ray…Ray…can you hear me, son?”

The only sound he utters is his labored breathing and nothing more… however there is a putrid odor coming off his stomach. Not a natural but an evil cursed odor.  Emily gags at the smell, and grabs some bandages to wrap around the wounds “Oh my son, what has happened to you? What can I do to help?”

Nothing but labored breathing can be heard as an unnatural greenish glow can be seen emanating from the edges of the bandages.  Emily gently removes the bandages, then quickly grabs a clean cloth to tie around her face as the smell immediately fills the house “Oh gods….” she then grabs another cloth, wetting it and starting to run it carefully over the wounds.  A gash across his stomach is revealed with the edges showing an odd kind of infection that seems to radiate green along with the heavy increase of the putrid smell and a kind of green mist rises from the wound.

Emily gasps as she sees the green and looks up to her ever-present companion “Arka, go find the witch Cinnamon, and hurry!” as the gryphon/bird hybrid flies off, she looks closer at her son, tears slipping down her cheeks silently as she continues to carefully wipe the blood from him “Don’t worry, son. We’ll get you better”

James turns his head toward his house as he hears the loud cry he tosses his hammer down and the piece of metal he started working on into the cooling waters, “Well…That’s ruined.” he takes off at a dead gallop, “I’m coming. Just hold out a little longer” he says as he draws his sword. Once he makes it to his home, he bursts through the door, “Who and where, my heart?”  Emily looks up with a blank stare, then goes back to cleaning up Ray’s wounds, occasionally glancing out the window, watching for someone that can possibly help.

Rayven lets out another horrendous cry of pain as his infected wound worsens sending a fowl green mist from his very breath before he falls back into unconsciousness on his mother’s floor… a darkness is trying to overtake him.

Lil Cinnamon works diligently on her tasks, focused on the potion she’s making, her attention abruptly turns to the window, as she hears a loud and consistent pecking… “What now??.. oh?? Arka, hey there!” She comes out “What is it hun?”

Arka, anxiously makes circles around her head, then flies away and comes back again, gesturing to follow her… “What is wrong, Arka?? Is it Emily??… is it…” Suddenly remembers… “The ranger… Rayven… is he back???” Quickly takes her bag and runs out following the gryphon as fast as she can. She follows Arka towards Emily’s house… gasping and trying to catch her breath, knocks at the door, and before she knocks twice, it opens and sees the ranger and Emily on the floor, Rayven wounded with some… strange infected green substance mildly glowing in them… “Oh no…! what happened?? …Rayven??!!”

Rayven gives no reply other than labored breathing accompanied by a fowl green mist and a cursed stench.  Emily looks up at Cinnamon, tears flowing freely down her cheeks “He…came in….looking…like this. Cleaned him as best I can, but…I don’t know what this is. Please…..I can’t lose my son”

Lil kneels next to Emily and putting a hand on her shoulder, gives her a gentle squeeze “We won’t lose him I promise…” examines the wounds closely, the green stuff in them is not familiar to her, however the stench…. her eyes widen “I hope it’s not…” Quickly takes some of her cleansing tonic and pours it over one of his wounds….. very slowly the green stops glowing and a dark dry green sticky substance is left on it “Help me clean this, Emily…”

Lil gives one vial to Emily to keep pouring onto his wounds, she does the same wound by wound, until the green mist is mostly gone…. “He will be fine, but he needs a good deal of rest” suddenly it occurs to her to look into Rayven’s eyes… the white in them has turned a sick yellow and his gaze seems lost “…. Rayven,” holds his head between her hands turning his face towards her “…. Rayven, look at me…”

Emily takes the vial and helps Cinnamon get all the wounds cleaned up, then turns her gaze to Rayven’s face “What…what’s going on? What happened to him?”

Lil Cinnamon looks at Emily with teary eyes “I… have seen this before… Hun keep pouring this onto his wounds, I need to go home and make another potion. He will be alright and help me gods if he’s not… He’s strong. Rayven, stay with us. I will be back soon” She rushes out the door and runs through the realms towards the healer’s hut, locks the door and starts preparing a potion…

James grinds his jaw, “When he recovers long enough to tell me what happened to him, send for me, my heart. For now, I’ve got…frustration to vent” he says as he grips his sword tight enough to pop his knuckles. Emily nods to James and keeps cleaning Ray, speaking low to him “I don’t know if you can hear me, son, but please…stay with us. I need you children more than you all need me. I love you, son. We’ll get you fixed up, I promise”

Lil anxiously and struggling to think straight, scrambles through her chest of drawers looking for a specific bottle…. “Blue crystals, blue crystals…. I am sure I have some, swear I left it here, somewhere…!! oh gods, for Chiron’s sake, please help me” Suddenly she stops in her tracks, as she has remembered where did she leave that flask, turns towards the chest under the bed, and pulls it out. She opens it, and under her Mother’s book of spells, finds what she’s been looking for “I knew it!!” goes back to the table and keeps working. 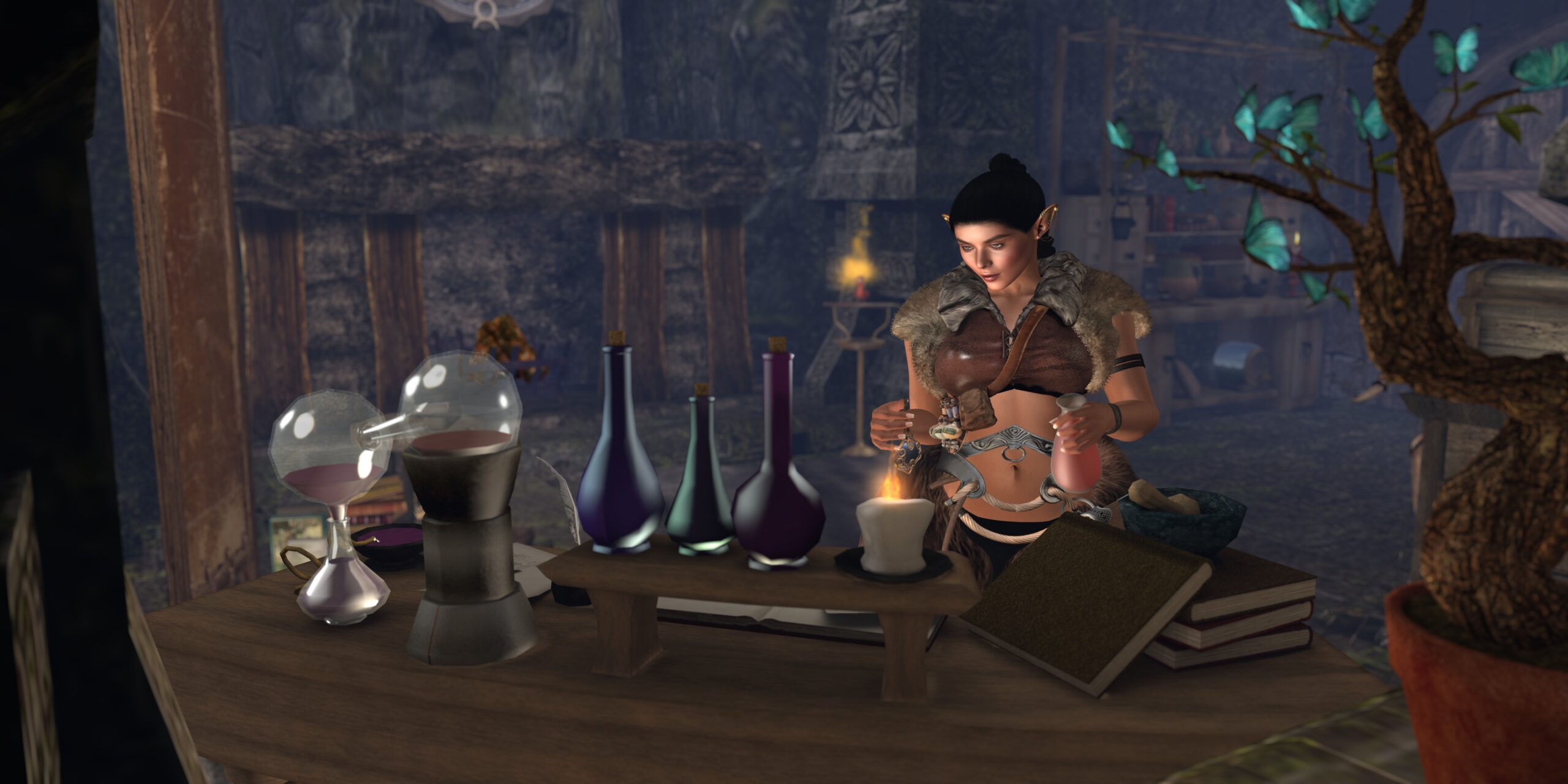 As soon as she has finished grinding the stones, she carefully adds in the cauldron the other 3 mixtures, one by one and tapping her fingers on the table, waits for the concoction to be done. Smelling the stench in Rayven’s wounds has awaken memories of old, not so pleasant times. His eyes, that yellowish shade. She closes her eyes, trying to remember more details…. those creatures hunting in the forest years ago… “His eyes looked just like theirs…”

Suddenly, her nostrils get full of a sweet fragrance combined with herbs scent. Coming back to the present, looks at her cauldron “It is ready!” Carefully, and with thick gloves takes the hot pot out to the creek to cool it down fast.  As soon as the potion is ready, she grabs an intricated amulet and fills the hollow crystal up with the mixture. Then heads towards Emily’s house with it and more cleansing tonic.

“How is Rayven? Has he waken at all?” She kneels next to him, takes out an amulet with a stone shining blue, and hangs it on his neck, then covers it with both hands, closes eyes and whispers a simple spell. Then takes out a flask with some liquid slightly shining the same blue as the amulet, pours it into Rayven’s lips, trying to make him drink. 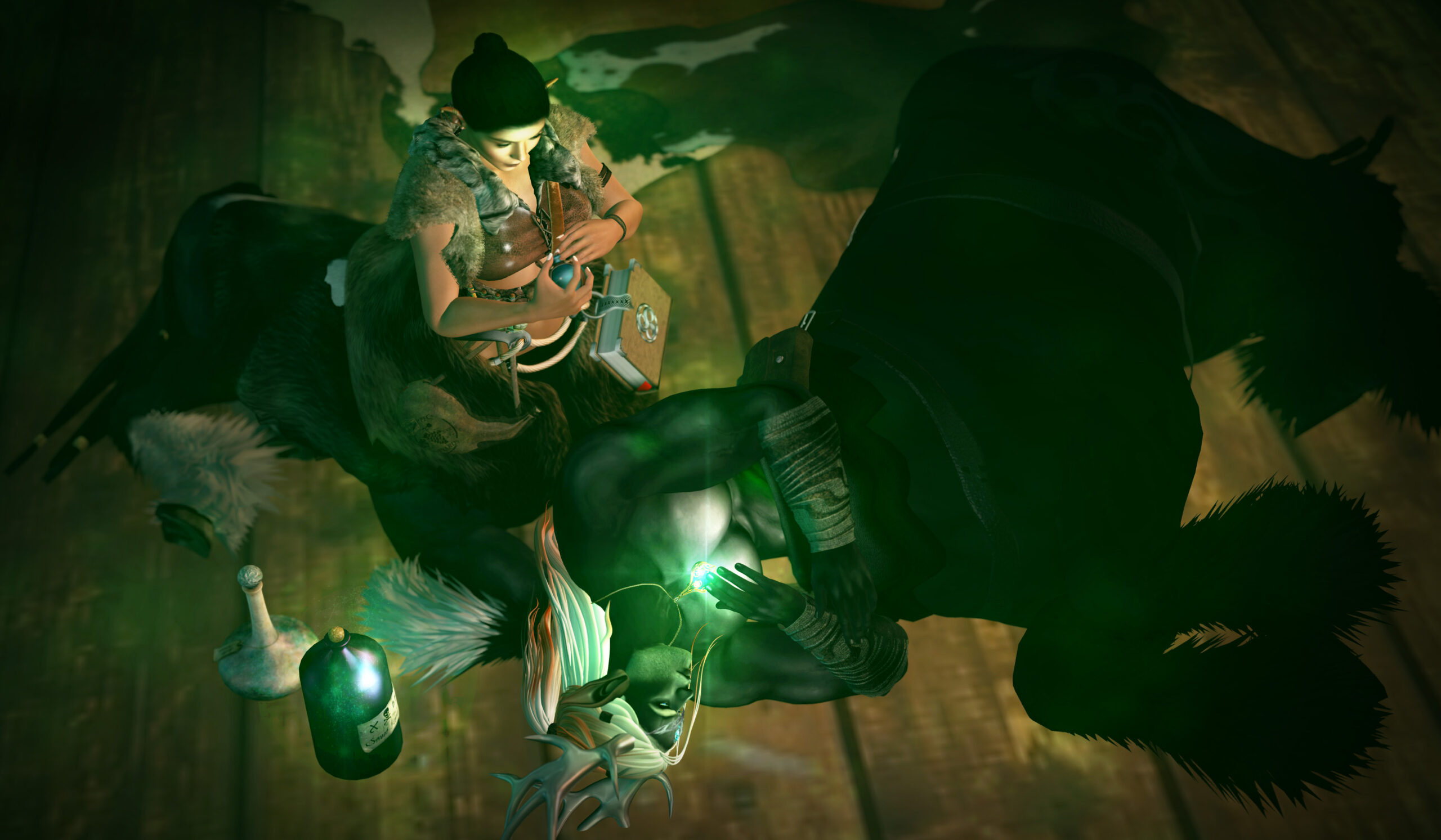 Rayven’s labored breathing becomes heavier and quicker as the potion courses through his veins… the first sign shows as he is no longer breathing a green mist and the greenish glow of the wound begins to fade, yet he still remains unconscious.  Holding his head, Lil offers him a second drink… “Come on Ray, be strong…” pours it into his lips a second…. a third time… Sits back and looks at Emily, grabs her hand gently. “And now we wait…”

Some time goes past and the greenish glow around his wound fades further and his breath becomes less labored and more even… whatever it was that the good witch of Cloudbirth has done seems to be working… his rest seems more peaceful now.

After checking thoroughly one by one Rayven’s wounds, and with the help of Emily and Dove, all of them seem to be healing. The stench is gone, and the yellow in his eyes is dissipating.

She packs her other potions up, but leaves the flask with the blue liquid on the floor… “Emily, Dove, please make sure he drinks a couple of spoonfuls every hour, at least. I am so relieved to see it’s working as intended”

Lil dries sweat off her forehead… and takes a long deep breath. “If anything worsens, as we don’t know much about these wounds, please send Arka to my hut and I’ll come back as soon as I can. He needs to sleep now, and you girls need a rest too.” Hugs tightly each one of the girls before going back home.

Dove takes the bottle looking up from her Masters side, her eyes filled with worry she leans over him, her hand gently moving over his arm and shoulder, trying to reassure him. Her mind races with thoughts of ways to keep him comfortable. She speaks quietly “Thank you so much for all your help, Cinn. I will keep you informed” Her gaze returns to her Master as fingers brush his hair from his face.

As the treatment takes a more profound affect the glow to his wound seems almost gone as he drifts to a more restful slumber with no more labored breathing.

Dove sits with him as he drifts of into slumber, his breathing slows, his chest rises and falls, her eyes move to his wrapped wounds, sighing softly her heart breaks as images of past flood her mind. Her mother and father were on Vittrolia side, not by force, they choose to stand with her. She shivers feeling the room cool as night begins to settle in. she turns adding another log to the fire, comes back and adjusts his blankets. she tries not to think of what is to come….