LiL knocks a the gate repeatedly and yells… “Kumiii!! Kumi!!! ”

Kumi hears Cinn knocking on the gate and trots over to open it “Cinn, so good to see you, come on in.”

“Kumii!” Lil catches her breath “oh Thank Gods I find you.  I’ve been looking for you” she gasps

Kumi’s brows furrow with concern “What is it Cinn, what has you so excited?”

“One…. moment….” Lil holds a finger up and holds her chest.

“Would you like some water, come, come over here by the well and have a ladle full.”

Kumi drops the bucket and pulls up water then scoops up a ladleful land offers it to Cinn.

LiL flops on the ground and gets the drink from Kumi… “Thanks darling“.  She drinks it all up in one go.

“Can we sit? I need to talk to you.. I need your help urgently, I just came from seeing Rayven, he came in yesterday badly wounded”

“Tell me Cinn, does this have anything to do with the gossip I heard? Oh yes, Rayven. the Ranger? What happened to him? What is happening?”

Kumi throws her head back and lets out a very loud groan “Ah then it’s just what we feared all along then?”

LiL’s eyes about to cry, but trying her best to keep composure “He was severely wounded, and his eyes, gods his eyes, the same yellow as the dark creatures before. I tried my cleansing tonic, and it helped, but it was not enough”

Kumi reaches a hand out toward Cinn as she sees she is very emotional “This is dire news indeed. It’s very bad if your cleansing tonic isn’t enough, I know your work to be exceptional.”

LiL continues “The wounds healed, however the eyes and that bad stench, the same foul odor as before… it remained and was worsening…. I had to go home to make …” She sighs deeply. “.. I had to make invertitia…”

“Have you given it to him yet?” asked Kumi

“I … improvised using Mother’s amulet” Lil shows her amulet hanging from the neck “Yes I did… I filled the amulet with it and made him drink some. I am thankful it worked as it was supposed to”

Kumi eyes the amulet hanging from Cinn’s neck as she listens. “This is good news, no?”

“In any case, I think the amulet enhanced the potion.. yes it’s great news, but see, I didn’t make this amulet, I inherited it… I can’t… I need your help” Lil sighs “You know how to make amulets, don’t you?”

Kumi straightens as she realizes what it is that Cinn is asking. “Yes I can create an amulet, one for each purpose. You need one to reverse the green stench, is this correct?”

“WE” Lil makes emphasis on the word .. “need to make some, but.. there’s 2 parts to it… and I am afraid it will involve the whole community, like before… we need to make Invertitia to counterattack the darkness. Kumi, it was THE darkness, that got Rayven, somehow I still can’t explain how he didn’t completely fall… he’s strong for sure.  One part is the potion, but the second part is the amulet itself, which if we make enough, will have enough to protect ourselves.”

Kumi sighs as she tries to make sense of what the emotional Cinn is trying to explain. “I’m not quite sure then what my part is in this, I can create an amulet for you if I know what it is to be used for exactly so I can collect the proper herbs and bind them with druidic magick. As for creating more invertitia, I will most certainly help with that.”

“Yes… we’ll need somehow to come up with a shrine where we put our potion and it will give us a full amulet, … and for now since we have time, we’ll need to make enough to store in case we need it.  I can borrow you my Mother’s amulet if you want… see? the crystal is hollow, I poured the invertitia in it” Lil hands her an amulet.

Kumi nods as she accepts Cinn’s precious amulet and looks directly into Cinn’s eyes “I see yes, fine craftsmanship this is. So you poured the invertitia directly inside it. You are wanting multiple creations of this?”

“Yes, or something that works like this one…. with this amulet, the invertitia works 10 times better… it healed Ray in one night”

Kumi nods “But we need something more for the green stench, is that right?”

“Well, the stench is part of the darkness I am sure, the green wounds… I am not too sure if they came from it… they were more coming from within Ray’s body. I took a sample and I was gonna head home to analyze it.  To me, it seemed like Ray’s body was fighting it.  In any case… all the rumors spreading.. they all are true.. Vitrollia might still be alive.”

Kumi nods understanding more clearly, she hopes, what it is that is needed. “So Cinn, did you write down this recipe or is it still in your head?”

“I just wrote it down, well most of it.. I can share you my notes” LiL opens her book and shows a page. Kumi leans over and looks at Cinn’s book, reading the page she is shown. “Ah yes, that looks good Cinn!”

“The old recipe for invertitia is all there…. but poured into a magical amulet, it should be much more powerful”

“Aye that’s true, a potion bound to an object with magicks would be much more powerful, we do indeed need to create more of these.”

LiL nods, “My magic is not enough, I am good combining all the herbs in the world… but my Mother did not inherited me her magick, see?” she laughs “And well… I anticipate that, to make this potion, we’ll need everybody’s help, gathering ingredients and cooking them in our cauldrons.”

Kumi smiles weakly, the seriousness of what they face clouding her ability to see humor in the moment. “I have plenty to share, don’t you worry Cinn I can help bind the potion to the amulet. Anuta taught me well.”

“If you follow me, I will show you something” says Lil

“Certainly, I will follow you, just lead the way!”

“It’s all been kept secret as of today, but with the urgency of the moment…. I think everybody should know now, especially you… Queen Julala has authorized me to share with you all I know.  She has set this up, to have the amulets in… when we have all 4 parts of the potion, we will come and put them in here, the shrine should give us an amulet.”

Kumi nods as she looks over the shrine and notes the crescent shape that is built into it. “This will serve very well, my magick works well with the moon and stars, you know my people came from there.”

LiL Cinnamon smiles with hope.. “I knew you would be able to, I appreciate so much your help with the task… Tomorrow the Queen will give further instructions to all of us, so we can start gathering ingredients and making the potion” 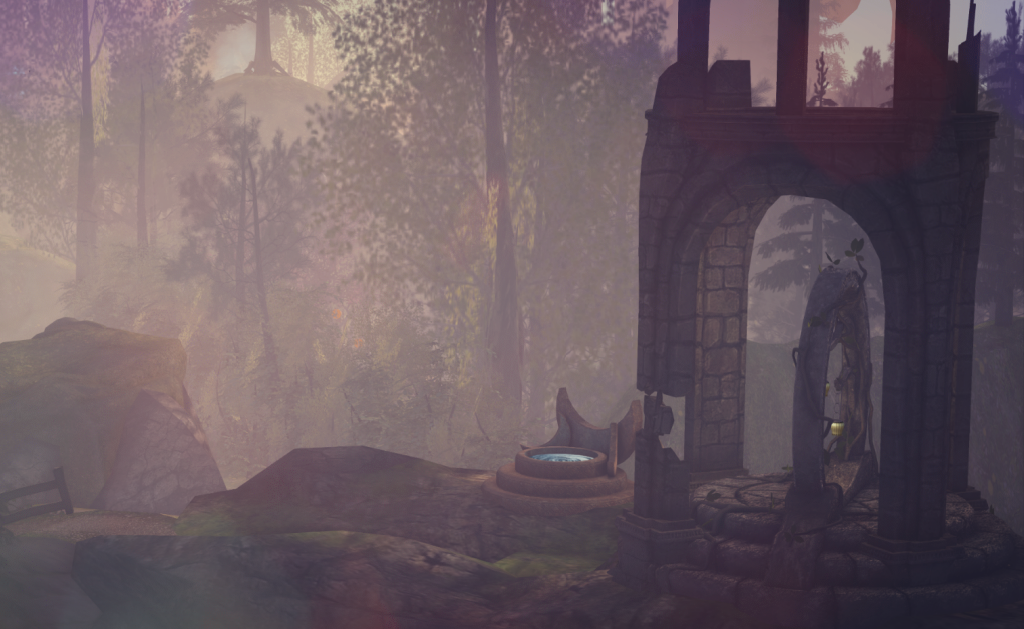