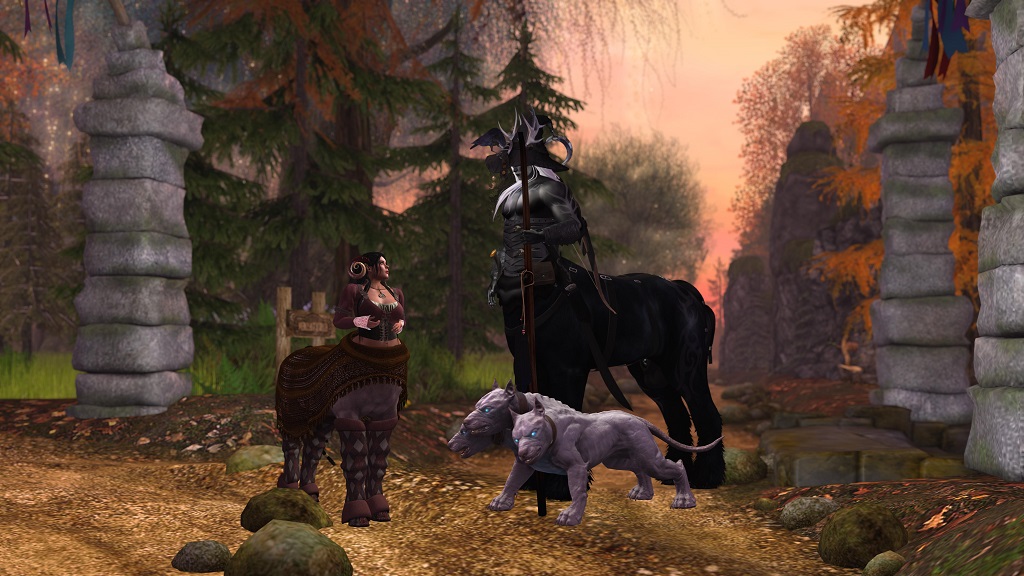 Cinnamon and Rayven found each other while walking towards the Great Hall.

Cinnamon: “This Hopping Jack is starting to piss me off, dude!”

Rayven Firebrand: “You’re up to seeing him now?”

Cinnamon: “What do you mean? I saw him! Like…I am sure I did see him”

Cinnamon glares at Rayven. “Listen you, ranger… I know what I saw. AND THIS TIME MY CANDY IS MISSING FOR REAL!”

Rayven Firebrand: “Probably down your gob”

Cinnamon: “What?? I just ate like… 3 chocolates, the rest is mostly gone. I had a WHOLE bowl. And it’s half way gone. Gone. POOF”

Rayven Firebrand pulls out a quill, ink and some parchment. “Alright, then. Describe this “highwayman jackalope” with as much detail as you can.” He rolls his eyes while he waits for the healer to give her report.

Cinnamon: “Ok ok.. I can do that. Focus, Lil focus… It was tall… well… maybe tall.. because he was leaning down… so big.. maybe tall, fur was black”

Rayven Firebrand: “Is that it? Tall, black with black fur?”

Rayven Firebrand: “So tall, black with black fur, one teal eye with shiny antlers. Anything else?”

Cinnamon: “He pointed something at me… I couldn’t see what, but it shined under the moonlight…. must have been the flintlock”

Rayven Firebrand: “Of course it was, cause that was what the story says.” he clears his throat and apologizes for the unprofessional manner of his response “Please continue.”

Cinnamon: “. AND he was leaning by the spot where I left my candy and my book. AAAAND he took my candy! HE TOOK MY CANDYYYYYYY” Cinn shakes Rayven by the vest. Well, that was it. The second I took my bow, he poofed, and tipped my bowl, scattered my candy on the floor.”

Rayven Firebrand mumbles under his breath “Which is probably where your candy went.”

Cinnamon narrows her eyes at Rayven. “I heard that, ranger.”

Cinnamon: “Oh… and there was this… crow on the trees… I’ve never seen it before. I tried to talk to him but he didn’t respond. He just left. It was definitely odd”

Rayven Firebrand clears his throat again “And the mystery crow. I have been hearing many taurs referring to this crow. What can you tell me about him”

Cinnamon: “Really, Ray… all jokes aside. It almost seemed like the crow meant to distract me with his loud croaks, it was just very odd. VERY odd! And well, it’s quite smaller, it’s not a raven for sure…. never seen him before. Not a friendly one either. I will ask Zipporah when she comes back. I am sure she’s with Poe at your place”

Rayven Firebrand wonders if it is the same crow he has seen around the hill lately. “Well it looks like my investigation continues domestically. If you remember anything else, you know how to reach me.”

Cinnamon sighs as they both arrived at the Great Hall. “…I will”.

The ranger pours himself a pint of stout and reviews all the new sightings that have been reported over the last couple of weeks… there are four that stand out the most, and though he is loath to believe it, these taurus may be right… at least to some extent… reading the reports he goes over his thoughts on the issue.

“Let’s see here. First there is the report filed by Brytestar. Though she hasn’t actually laid eyes on the fiend in question, insinuating circumstances support the possibility of the existence of Hopping Jack. The result of which has led to the queen giving the order to have all ravens patrol from the sky in search of this Hopping Jack character.”

“Second on the same day that the queen has given the order, Marilina has claimed to catch sight of him. Albeit for a brief moment before he seemingly vanished into thin air.”

The ranger takes a deep drink of his stout and grabs his pipe… after packing and lighting it he continues going through his papers.

“Now the third is a bit more interesting. A report came in from Mae, of a strange small raven or crow spotted in the area, first by Mae then by others. I myself recall seeing this strange bird on the hill, but it would never allow me to get close enough to see him clearly or even make his acquaintance. A fact that is odd for no raven or crow on the hill shies away from me.”

“And now we come to the fourth report. This came right in earlier today by our healer Cinn. According to her, not only did she see this “highwayman” but she claims to have caught him in the act of his theft. She even says that he drew on her then disappeared the moment she took up to defend herself. She has also stated seeing the same strange crow during and, according to her, it was trying to create a distraction to aid in covering this highwayman.”

He pauses in thought and remembers his last ranging and what he has discovered there.

“Looking at these reports it is hard to not believe in their validity, however in my travels I have witnessed many things the people from all around can do. I have seen charlatans use tricks to make it appear that they can disappear and call it magic. I have seen others train avians to work with them to accomplish many feats, least of which is hunting and or thieving. In fact here in Centauria we have a close relationship with ravens in particular. They are the senders of our messages, after all. And then there is the incident in the village of Hoofington. They too, like many others, had their own Hopping Jack myth. One in which a hoomans fiend used to his advantage and wreaked havoc in the name of this Hopping Jack to steal for his own benefit. Given all this I am not fully convinced that Hopping Jack does exist, however there is definitely something happening in Centauria. I need to keep my eyes peeled and stay on guard. Samhain is barely two days away. If this thief keeps to the story, then on the first, all hell is going to break loose. I must be ready.”