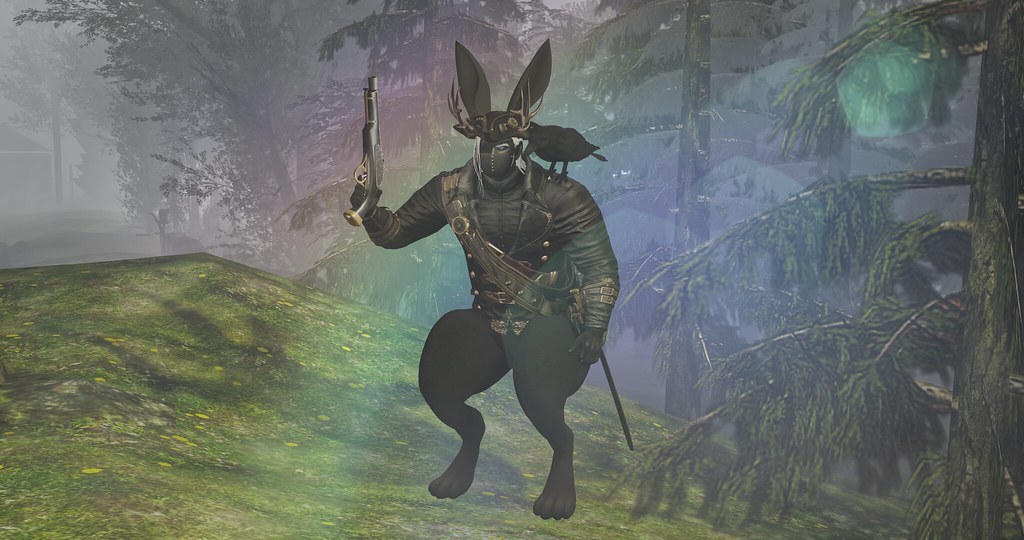 “Fast as fast can be… You’ll never catch me.” These words are the last thing one hears when they run afoul of the famous highwayman, Hopping Jack. A famous thief who steals all things shiny and sweet. His desire for treasure seems to be insatiable as he terrorizes through the land robbing anyone and everyone that crosses his path, but don’t pass judgement to harshly on him. Believe it or not he is as much a victim as all that find themselves staring down the barrel of his flintlock.

To truly understand the rogue, we must first understand his origins. He was just a normal jackalope. Nothing abnormal or criminal about him. His only vices were his curiosity and a love of things that sparkle and shine. But not in an obsession with gold and jewels as one might think, just merely simple things like a polished stone or a piece of tinsel discarded with an old Christmas tree. Normal things such as that. However, this simple delight will prove to be his downfall.

Many years ago on a pleasant day, like any other day, Jack was hopping around and enjoying the warmth of the sun and the smell of the sweet spring air. Nothing was amiss in this glorious day. The birds were singing, the spring flowers were beginning to bloom, all things pointed to a happy time, but alas it was not so for Jack.

While hopping along happily without a care in the world, Jack happened upon a spring fed pool of crystal shimmering water. Seeing such a sight filled Jack’s heart with gladness as he hazed at his reflection on the sparkling waters of the pool. Jack smiled as he gazed further enjoying seeing himself as one of the shiny things he so enjoyed when something caught his attention.

Jack peered harder into the sparkling water and say a stone. It was perfectly polished as it shined and shimmered in the center of the pool. Jack reached in and plucked it out to get a closer look. It practically glowed and sparkled as if it were a burning ember crackling in wood fire. It had an unusual energy and aura to it that became more visible out of the water. This was truly the most beautiful stone he has ever seen in his life.

“What a curious and glorious stone this is?”  said Jack to himself. “So beautiful and bright. It will truly be the crowning jewel of my collection”

At this jack put his beautiful find in his satchel and made to leave. And that was the worst mistake of poor Jack’s life. The pool, you see, was no ordinary small body of water. It was a faerie pool, and the fae don’t take theft lightly.

Jack stood up to go on with his day like normal when he found himself surrounded by dozens of angry looking fae. Scared and shocked, Jack stayed in place, daring not to move or speak.

“What is happening here? Why do they look at me with such venom on there eyes” Jack thought to himself.

“Thief” hissed one of the fae.

It was at this point a massive glowing light formed before Jack’s eyes and took the shape of the ruler of this fae court. She looked down at Jack with a steely gaze so sharp that he swears he can feel the very hate of it pierce his very skin.

“You dare steal from us” came a disembodied voice pounding at Jack. “You dare sully our sacred pool and steal it’s precious gem with your unclean hands, half breed!”

And now Jack was truly afraid for his life.

Jack removes the stone from his satchel and attempts to hand it to the fae queen while sayin, “Please forgive me. I knew not where I was and I meant no disrespect. I humbly beg pardon for the offense I have given.”

But the queen refuses to take the stone from Jack as her glare deepens with a fire that can burn entire nations to the ground. All around his he hears the faeries hiss words of hate, like “unclean, impure, thief, defiler.” He attempts to approach the pool to return the stone, but his path is blocked by a group of angry fae glaring and hissing at him. He attempts to throw the stone back into the pool but the moment he drew back his arm, dozens of fae bows drew and aimed straight for his heart.

“Defiler… Thief… Rogue..,” he hears coming from the fae as the look upon him with disgust.

“You steal from us, we steal from you,” exclaims the fae queen as he is suddenly rushed by the group of enraged fae.

Bound and frightened he attempts to struggle to free himself for the raging faeries as they prepare to punish him. He see a fire being built and dread fills his heart. Then they light the fire while giving him those icy steely glares.

“What will they do to him? What punishment have they planned for me? Am I going to die? I don’t want to die. Please I meant no harm. I didn’t know. Please.” These are the thoughts running through Jacks head as a cauldron is added to the fire. Everything is beginning to look as though a ritual is about to happen.

“By the gods do not make ne a sacrifice,” runs through Jack’s mind as terror grips him tightly.

“You steal from us, we steal from you,” repeats the fae queen as she slowly approaches him with a fierce icy smile.

“What is that in her hand? A knife!?,” Jack thinks as the queen slowly approaches smile darkly.

Jack struggle harder but the ropes he is bound in are enchanted. Every attempt he makes to free himself is in vain. Such attempts to gain his freedom seem to delight the queen as she approaches smiling and repeats, “You steal from us, we steal from you.” And suddenly her icy hand presses down on his head and forces his right eyelid open.

“You steal from us, we steal from you,” she says a final time as she plunges the blade along the side of his eye and digs it out from it’s socket.

Jack screams out with immense pain as his eye is being removed from his head. His screams of pain seem to delight all the faeries around as they looked at him with justified satisfaction. The queen raises the eye to the sky and all the court begins to cheer and chant to see their new prize. The chanting intensifies as the queen approaches the cauldron with the eye as she chants even louder. When she reaches the cauldron she tosses in the eye and a brilliant blue flame spirals upward as the queen chant even louder with her arms stretched up to the heavens.

Suddenly a surge of energy washes over Jack. The blood that was running down his face like a river has stopped and appears to be returning to his head. A new sensation overtakes him. Like a pull controlling him beyond himself. It feels  as if he was… cursed. The fae have cursed him to what purpose he does not yet know but he was definitely was cursed.

The queen approaches Jack once more, smiling, and speaks to him directly. “Since all things that shine and glitter attracts you, you will never have enough but none will ever be as fine as that which you have stolen. Though you will try. Forever you will try.  Now since you stole from us you will steal for us. Candy is what we desire and candy is what you will take. You will bring all matter of sweet things to us without fail. Do this and you will live. Do this not and next we take your heart, and with it, your life. Twice a year we will present your offering to us.”
She whistles and a raven approaches and lands on Jacks shoulder.
“This is sharp claw. He will watch over you from this day to the end of your days. Stray from the path I have placed you on even a little I will know and you will pay. You are mine now and you will atone for your sins against us. Now go and seek the treasure you so desire.”

And with that, the fae were gone. Poor Jack stands there unbound and frightened. He reaches for his face and finds himself short one eye and the stone he plucked from the pool still in his satchel. The raven on his shoulder caws in his ear as a constant reminder that he is being watched. He looks down and sees a flintlock at his feet. A beautifully crafted piece sitting next to what looks like a leather eyepatch. He affixes the leather piece on his head to cover the empty eye socket then reaches for the flintlock pistol.

“What an exquisite piece this is”  he says at the light suddenly reflects off the ornate barrel.

Suddenly the desire to own it takes over and he can’t even bare the thought of putting it down.

“Mine!” he exclaims as he clutches the shiny flintlock close to him. He looks around to see if any dare to try to remove his shiny new gun from his person. And that’s when the scent hits his nose. An overwhelming sweet sugary scent that he had to just have.

He follows his nose to find  some children and their mother out in a meadow. A bag of sweets lay there in front of the mother. His eyes train on the bag of sweets as he bounds forth in surprise and points the flintlock at the mother.

“Stand and deliver, if you please, madam!” he shouts at the startled and frightened woman. “Your coin, your jewels and your sweets. I’ll have them all with haste!”

Scared, the poor woman complied handing over everything she possessed that shines sparkles and is sweet. Satisfied that he has all he desires from her he says the words that has become the signature of the one now called, Hopping Jack.

“Fast as fast can be… You’ll never catch me.” And in a puff of smoke he disappears without a trace.

Now here I leave you to ponder the poor plight of Hopping Jack. He cannot help being what he is. He was given no choice, just for a simple mistake. But be warned. During the times of  Ostara and Samhain, know that’s when you will likely see him the most. If you carry things the sparkly and shine and things that are sweet, know that Hopping Jack will find you and what you have, will soon be his.