Emily Williams walks into her house, carefully checking that the door and all windows are locked tight before going to her trunk and lifting out the small box of her mother’s belongings, including the diary that she managed to salvage after her family was attacked so many years ago “Ok, mother, let’s see again what you said about the fae that appeared at my birth.” She starts going through the pages, reading and re-reading every entry carefully, knowing it would take quite a while to read it all.

Miro has delivered the little canitaur safely to the windmill, and she slips off his back to the leafy ground. After a brief conversation she pulls the door shut behind her and heads straight for her straw and blanket bed, flopping onto it still in her trick or treat dress and floppy hat. She wipes her face with her paws and sniffles a bit as she hides as deeply in the blankets as she can get, only lifting a corner when Pine Nut flutters down from the rafters so that he can nestle his warm, feathery fluff in next to her. “I led him right to them, Piney. He followed me with my candy and…and he could have hurt them…” The corvid croaks softly and preens at the fur of her head. You didn’t know. Couldn’t have. He’s a thief…trained. Knows how to sneak and follow. They’ll find him soon and be rid of him. Dixie nods and sniffles again quietly, but settles down, the tension and adrenaline finally wearing off to send her into a deep sleep.

“You FOOL! You wreckless, weak minded FOOL! What were you thinking about attacking such a large group? You Could have cost us EVERYTHING! Think you could have ended it all in a single raid? Think it was going to be that easy did you? Or were you hoping to get caught?”

“That’s it, isn’t it. You think that if you get captured here then you won’t have to fulfill your duty to us. You think getting out of this is sooooooooooooo simple. You will NEVER be rid of us. You belong to us! You steal for US! Hear me well, jackalope. If you ever attempt such a foolish stunt again, promise you that there is no punishment in all the hells that will compare to that which the queen shall inflict on you.”

Jack remains silent and hunkered down on the ground with blood running down his arms from shielding his head from Sharp Claw’s assault.

The Queen arrives back at the castle. She is anxious. This threat doesn’t seem as hostile and dangerous as past threats like the darkness…but….somehow…there is an element that is familiar between the two. The darkness turns good creatures to dark…..and the fae turned this creature into something…..well…..something not good for sure. Pulling firearms upon her people! This had to be stopped and stopped now before someone gets hurt. 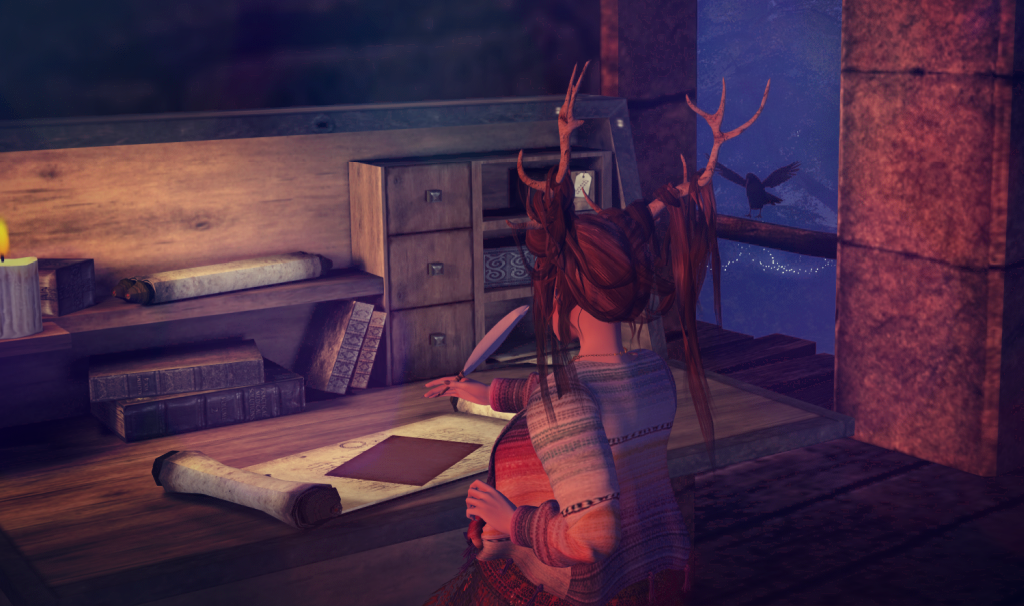 “George!” she calls “Come quickly….I must write a message and I need you to deliver it to the fae we visited earlier this year” George flies in from outside and flusters down to the side of the Queen’s desk cawing as he sees the Queen’s concern

Julala sits at her desk and starts to write

I need some assistance from you and I am in hope that you may be able to help us. We have been visited in recent weeks by what appears to be the creature of myth “The Jack-o-Lope”. He has been incredibly swift and sneaky and has been thieving from the good people of Centauria. Of greater concern is that he has threatened some of them in the process and I am concerned for their safety.

It is somewhat of a surprise to me that this mythical figure does indeed appear to exist, although we’re not entirely sure that he is legitimately the creature or an imposter, it does appear that there is magic at play here for certain.

I seek any information that you can give us to cast light on this fellow and the alleged curse that was put upon him by some fae. I presume these fae must be brownies or unseelies of some kind to have cast such a curse upon a creature. Do you know of this Jack-o-Lope? Do you know what happened to him and of greatest importance….do you know how we can perhaps rid him of his curse and bring him back to the light?

Please send any information that you may have that we may help this creature and keep the good folk of Centauria safe.

Julala rolls up the parchment and ties it carefully with a cord. George lifts his feathers and pushes his message pouch out towards the Queen, who pops the little parchment scroll inside. “Fly fast and fly…..oh nevermind …you know what to do George”, “Yes, Your Majesty” caws the raven with a slight mockery on the edges of his beak. He hastens to the window as he notices the Queen’s stern stare and hops off into the night to deliver the message.

My dear friend and healer Lil

I had a thought…..this curse on the Jack-o-Lope…..I have had an idea…….please meet me as soon as possible so that we may discuss it!

She turns around and realises George is off making a delivery already. “Where is a raven when you need one?” she mutters. She looks around for a moment and then starts to make haste downstairs “Ronald!” she calls “Ronald…where are….oh good god….what….please…get out of there…and clean yourself off….I have a task for you….I need you to deliver this message to your friend Lil….that shouldn’t be too onerous on you should it?” Julala raises an eyebrow at Ronald who stands dripping and stinking in front of her. Ronald’s face lights up and he hastens to pull some…..curiously cleaner than usual….pants on.

Julala shakes her head and goes to fetch a mop as Ronald skips off into the night toward Centauria.