Cinn walked back home with her bow in hand, and upon arrival, she offered Zipporah her arm to land on, as her white familiar followed her flying, back from the Great Hall. “I can’t believe it!! Just cannot believe it, Zip… Can you believe it???” Zipporah tilted her head, blinked and cawed softly. Cinn shook her head, visibly annoyed and upset at the earlier events. She walked in the house, and slammed the door shut behind her. She was angry. Angry at that… Jack-o-lope person, angry to the fact that she could probably have done more than just goof around with the whole Hopping Jack story from the very start. Of course, at the beginning it all seemed like nothing but an innocent Halloween myth, fun to play with and tease about, but as the days passed, she had a feeling there was much more to it. She should’ve really put more effort into convincing the ranger and the Queen. But of course, she could never get ahold of any proof of his existence; not a trace or a print on the ground, no scent left behind, nothing! And he poofs away so fast! How, just HOW are they all going to trace him, much less catch him???

“How could he just… think he could come and point his gun at my people!!??” said Cinn, throwing her hands in the air “…At Emily, at Dixie, for Chiron’s sake!! She’s just a pup!!!! And then… and then take their well earned belongings!!?? He’s a coward, that’s what he is!” Cinnamon lifted her index finger “…A nasty, ugly, coward little thief!!! I swear, I swear I will… UGH!!!” Cinn ranted, pulling her hair and pacing back and forth nonstop in front of her fireplace.

“I am going to get him. That’s right. I am going to grab some candy, and I am going to wear my shiny amulet, and then grab my BOW, and go out there right now, and get him! I will find him! That’s right, Zipporah!! Just watch me!” Cinn said in desperation, remembering the still fresh image of Jack in her mind, and how big of a creature he was. “…Aaaaand on second thought …after that, if the Queen finds out that I went out there alone and put myself in danger, I will earn another two weeks of goblin…” She shivered and sighed. “Gods, what are we gonna do with this nuisance?? I have to think of something, I have to…”

Persistent knocks at Cinnamon’s door interrupted her thoughts. “Who is it?”

“Miss Cinn!! Miss Cinn!!! It’s me, Miss Cinn!!” A high pitched and quite …familiar voice answered from the outside. Cinnamon froze for a second. “Oh……. No…….” she mumbled slowly. Cracking the door open, Cinn saw Ronald standing there, wearing… fairly clean pants, grinning ear to ear, and waving a note in his goblin hand… “Message from the Queen, Miss Cinn!!” Ronald said out loud excitedly.

“Heeeeey… Ronald… hehe… So good to see you again…” Cinn greeted him, faking a smile, and slightly covering her nose with her hand. She opened the door, letting the goblin in and received the note. After a moment, she finished reading and nodded. “Alright. Yes, I can do that. Ronald please tell the Queen I will come and see her first thing tomorrow morning, and…”

The healer lifted her eyes at the goblin, but he was already sitting up on the bench by the table, swinging his feet back and forth grinning and looking at her. “Tacos?”

“Ehhh…” Cinn scratched her head “…I don’t have any tacos for you tonight, Ronald, sorry. Hey, I tell you something, please take my response to the Queen and… actually… Ronald, …would you come with me? Just to Raven Hill, I am going to talk to the ranger and Orion right now. They might want to come with me to see the Queen tomorrow…”

And as soon as he heard this, Ronald jumped off from the table and ran out of the house and towards the road, with the same stupid goblin grin on his face and pulling Cinnamon by the hand “Come on, Miss Cinn!!!”

“Ohhhhh boy…” Cinn thought, as they both walked towards the ranger’s house. She chuckled. “Maybe a visit from Ronald at Raven Hill would make things even, for Rayven not believing me… and maybe he will even share with us some of his famous beef jerky…” 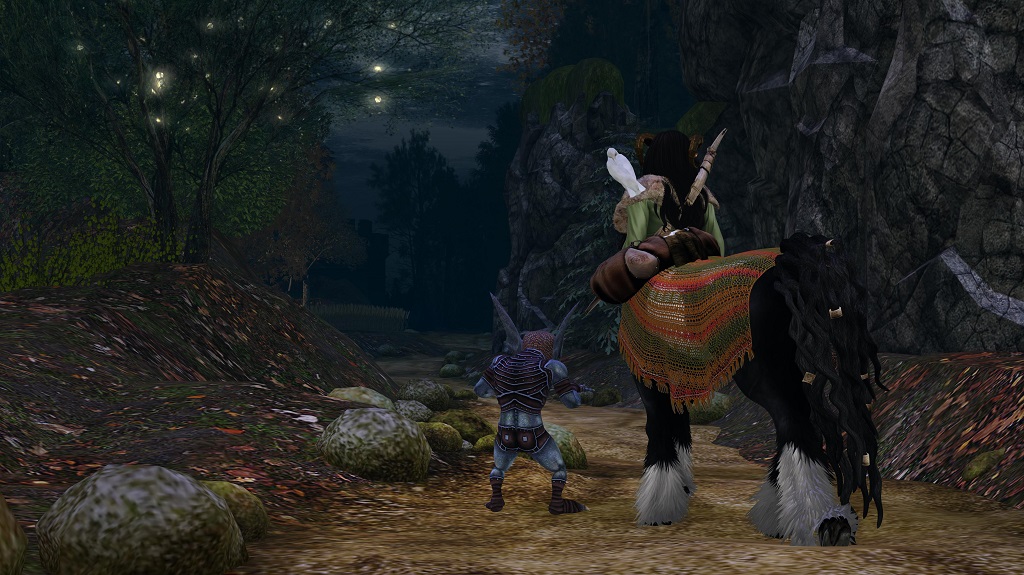 A knock at the door and the familiar voice of the healer, Cinn, leads the ranger to open the door when a sudden and unpleasant oder assaults his nose “Cinn and… Ronaldo. What a uh nice surprise. Come in… uhhhhh Ronald, please wait outside. Hold on a second.” the ranger goes into the kitchen and comes back with a rathet large bundle and hands it to the goblin “Here. I am sure your being here is no mere coincidence so take this fresh batch of jerky. It’s my specialty spicy jerky that just came out of the smokehouse this morning. Sit out here and enjoy that while Cinn and I speak inside. In fact,” grabs a pitcher of stout and gives that to the goblin as well “Here’s sonething to wash it down with.” he turns around and grabs Cinn by the arm and brings her inside, closing the door behind him “What in Chiron’s name is he here with you for? I take it you have a message for me.”

Ronald’s face lit up, and grinning big he took the bundle and the pitcher and plopped down right by the door. Happily he took a piece of jerky from the bundle and started munching contentedly “Remember we talked about the burping” Cinn warned. “Mrrokaay” Answer Ronald, letting out a little fart “Sommrry… That was an accident…”

“Oooshhh…” Cinn covered her nose, and let Rayven drag her into the house, chuckling a little. “Ronald came to deliver a message for me a few minutes ago, the Queen wants to see me, as soon as possible. She wants to discuss about Jack. I thought you and Orion might want to come, tomorrow at first light. If you both agree, I’ll send Ronald back with word to Her Majesty that the 3 of us will be coming.”

“Send back your goblin. We will be there.”  The ranger turns to his sleeping brother and bounces an obol off his head “Wake brother. We have business with the queen. Eat, bathe and ready yourself. The sun may set on all taurs, but it waits for none.”

“Agreed. I’ll talk to him… and um… I’ll wait outside for you boys to be ready.” Cinn walked out the door and gave instructions to Ronald, who emptied the pitcher in one go, packed up what was left of his bundle of jerky, and still munching he nodded and skipped off back to the Queen’s castle.

Orion swings his head up and startles at the thrown object. “BUH! WHat is it?! Jackalope?!?! Am I being shot???“, he shakes his head and rubs the confusion from his eyes, crawling out of bed. “An audience with the queen? Right now? Alright, I hope I can guess what she means to discuss.”

Rayven shakes his head at his at his brother “Get cleaned up and eat, you lout. The queen will tell us her mind when we arrive.”

Orion briskly finishes cleaning and eating and goes to stand beside Rayven, nodding in acknowledgement and waits to leave with the small party of taurs.

Rayven opens the door and calls out to Poe “Let’s go brother, and remember to close the door behind you.”

Emily steps out of her house in the early morning hours, sighing because after 2 days of scouring her mother’s diary, she’d learned nothing about the fae present at her birth. Suddenly her eyes are drawn to a faery ring of mushrooms near her grapevines, one she knew wasn’t there before. She steps over to it and closes her eyes, concentrating hard with her thoughts “Oh sweet fae, please, I need you. Please come to help me.”

Suddenly the air gets warmer, and as she opens her eyes, the area around her is filled with what appears to be purple and pink fireflies, but she hears soft voices singing, and a large glowing purple orb lands in her hand. She whispers softly to Noni to stay still, then looks at the fae orb as a voice whispers in her mind “What is it you need, dear one?“.

She hears her own voice in her mind instead of in her ears as she tells the fae of the jackalope bandit, and asks for their help in learning more about him, and possible knowledge on any curses that may have been placed upon him. When she is finished, there is silence for several moments before she hears “We will see what we can do, dear one. Meet me in this location again in 3 nights’ time.” Emily nods, and the fae vanish, but not before she hears “Worry not, little Miracle. Centauria will be safe.“