The ranger and Dove stop by the healer’s hut to get the final ingredient he needs for an invertitia amulet. Such an undertaking makes him nervous, because he is not well versed in, what he calls, “witchy woo.” Luckily for him, he dear Dove is a Cloudbirther and will make sure he doesn’t blow himself up.

“It’s unnatural for a Glenstormer to dabble in such forces,” he thinks to himself as they request some saffron to complete one of the ingredients necessary.

During such time, Dove takes the opportunity to give the healer the bandages that were on the ranger on the first night of his injury. The healer in turn gives Dove some vials of topical ointment pain ointment to place on the ranger’s wounds as he sleeps. As he he needs such a thing the ranger pounds his chest like a mighty taur in his head

Once all the ingredients are gathered, Dove escorts the ranger to four different cauldrons, one for each component.

“The forge is easier,” he muses to himself as one by one he completes each component. “Now for the moment of truth,” he thinks as the last component reaches completion.

It is from here that Dove takes the ranger up to the moon shrine to complete his task. Dove makes sure that he places the components in the right order and the shrine starts to make a strange noise.

“Is it supposed to be making that noise?” he ponders, but is quickly reassured by Dove’s calm demeanor.

“Witchy woo. This is no work for a Glenstormer,” he says to himself as the magic of the shrine completes its work. Success (as if there was any doubt)!

The ranger pounds his chest and winces a bit but tries to play off having any discomfort in his stomach. He peers into the newly formed amulet and whispers, “hello old friend” while lightly rubbing over his stomach wound. After taking a moment remembering the familial bond he had with invertitia just days prior he finally takes the new invertitia amulet to the member hall to be added to the stockpile. 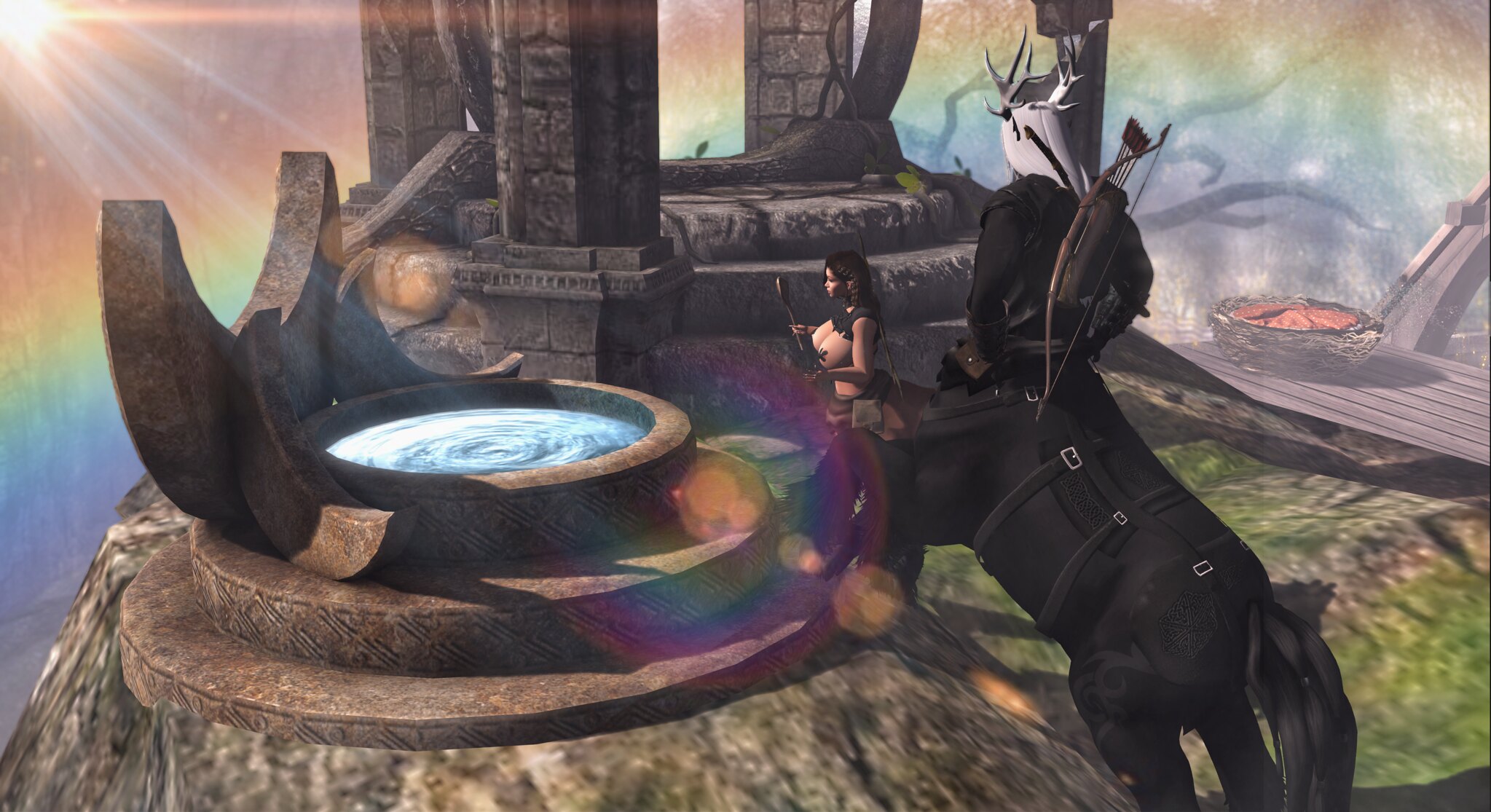 Sticking her tongue out, Lil carefully prepares her ingredients for Fire powder. She reads her now worn and dirty recipe scroll… “…And 3 portions of green algae…” She makes the mixture and waits patiently. Suddenly, a loud BOOM! echoes across Roonwit, and Cinnamon’s face is covered in purple dust and ashes. Slowly opening her eyes, she rubs soot from her face, looks down at her recipe, throws it on the ground and stomps on it. “Arghhh!! For Chiron’s sake!!!!” Then she picks it up and realizes that …there’s a squashed bug on the number 3. Blinking a few times, she realizes is NOT a 3… Cinnamon rubs off the scroll, takes a long deep breath, cleans the mess up and goes to get more ingredients. 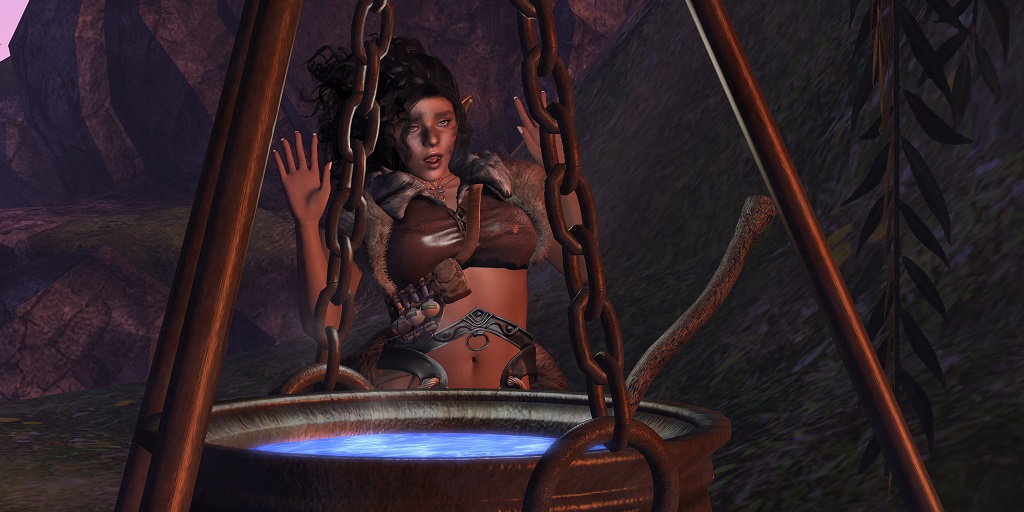 Dove wakes in the night to see her Master in a deep slumber, she quietly gets up with out disturbing him. She reaches for the containers that the healer Cinn gave her earlier that day, going to his side she begins to very carefully remove the bandages that are wrapped around him, applying the her herbal salve, she then re-wraps his now scaring laceration.

She watches him for a moment as he moves in his sleep. Her thoughts not able to shake that unmistakable knowledge that the darkness is back, if not the same its too close. She doesn’t know what to do, she’s nervous and scared.

When she was younger she use to take walks at night in the forest, things were so calm and peaceful. But that is when the thought of seeing her Master, the Ranger for the first time. She watched him as he sat, taking a break before he was interrupted by a cute little white furry creature, watching their interaction she realized it was the first time they were meeting.

Smiling to herself that memory fades and she comes back to the present. She decides she can’t stay inside anymore, she writes a note to her Master to where she will be, she dresses, quietly leaving the safety of their cave. She heads out to gather ingredients to help with the amulets and swords.

Lil hides behind the tree “Nothing….just being cautious” she laughs. 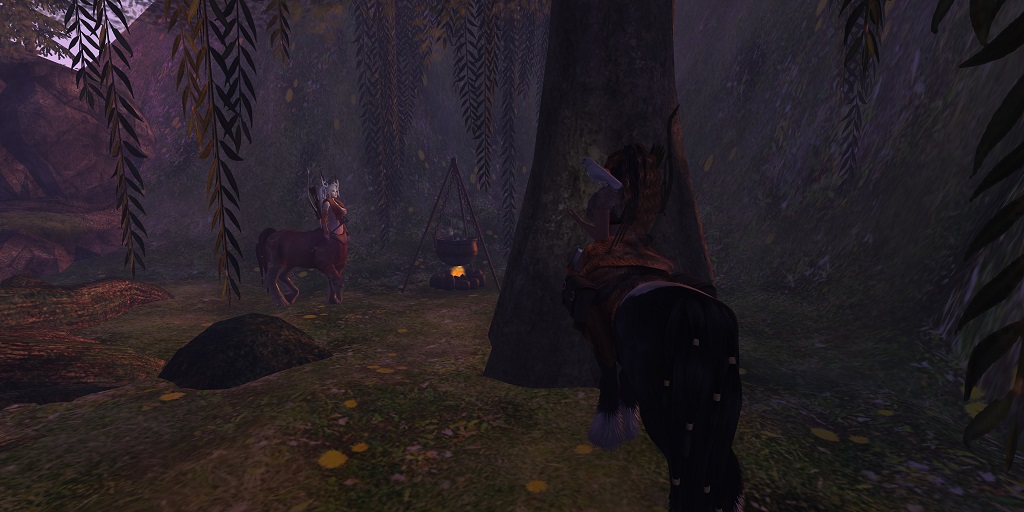 KumiKiyoko:
“Greetings Nalo, you’re looking well. Are you finding everything you need for the amulets we need to make to fight off the darkness?”

Nalo:
“Tala great one”
“I had thought the newts would be in water – but have found them not)“
“I am almost done with the sword list” mumbles about a cow running off. “The amulet list is long, but I’m working through it”

KumiKiyoko chuckles:
“Oh aye, the elusive newts. I can help you find them but please, bring the blinded ones to my sanctuary after. So, just come this way.”

Nalo
“Yes, the souless ones are odd”

Mitzy had been gathering the needed components for each of the ingredients that are needed to create the Invertitia potion. She had traveled all over Centauria searching and learning the lay of the land.

Finally she had managed to find every item on the recipe scroll “hmm lets see that’s cornflower, toadstools, sage grass…” -thinking out loud as she, carefully tucked these things and the others in her belt pouch and secured the pouch closed. “yes that’s everything I need..now to start creating the parts of the potion“.

Her hand came to gently caress the owl pendent which hung from around her neck on a cord of leather, her thoughts going elsewhere for a moment or two, going back to a time when she was younger and spent much time learning from rangers, druids & fae of the forests of her homelands. They had taught her how to survive in nature, to use a bow and had helped her perfect her innate magics.

The sounds of birds singing in the trees brought her mind back to the present and she pushed away thoughts of past times- “Well now…I guess I’m off to visit the cauldrons“.

She took a moment to refill her bow’s quiver from a spare she kept inside her cavernous home. Though she had magic, lately she saw the need to have at least one weapon with her while she wandered Centuaria. One never knew when the moment of need would arise. She left the meadow-like yard outside her home and went off at a trot toward the first cauldron she sought.

Hours later Mitzaria stood before the cabinet where others had dropped their amulets off before her, to be counted. A satisfied smile came to her lips, she was happy to aid the cause of her new homelands. She was glad that she hadn’t had any mishaps in preparing the components for the potion. Aside from loosing her way a few times in this new land, which was quickly solved with aid from some new friends.

She gently opened one of the drawers and added the amulet to the count then pushed the drawer closed just as gently. Backing away from the cabinet, she cheered and stomped her front hooves lightly in excitement- “For Centuaria…Blessed Be!” She giggled softly as the sounds echoed through the building, she made her way to the exit and left for home to get a warm meal as the night went on.

(([01:02] AOC Apothecary Cabinet for Invertitia: mitzymayhem Resident has added a amulet to the potion store!!!))

Jezebelle strode quietly into the smithy, a sack full of ores and materials slung over her shoulder to make a sword. She’d never been much of a blacksmith, in fact the most she’d ever helped out in the smithy was to fetch water for the quenching barrels once or twice.

Still, she was a Glenstormer after all, and if her swordplay was any indication, she wasn’t one to give up on a task just because she wasn’t immediately good at it. Hopefully making swords was easier than using one.

Setting the sack of materials down, she noted the forge fire had been doused. That made sense, it was late after all; she’d purposely come out this late to avoid running into people. And it wasn’t a problem for her, either.

With a whispered word, flames leapt from her fingertips and reignited the coals. A flick of her wrist set the bellows pumping of its own accord. She could just see Rayven in her mind’s eye shaking his head about using magic to do this sort of labor, she knew her friend had views about that sort of thing. Too bad for his views, her talents lay elsewhere.

She found the process of making the sword to be rather simple. The instructions she’d been provided were concise, and most of the tools she needed were in easy reach. Hammering the kinks out of the blade from the mold was the tricky part, but once she found a rhythm she found she could almost just zone out and swing the hammer.

It was a far cry from the mental effort and intense concentration she was used to needing to learn new spells. She made a mental note to try this more often. Next she tapped the pommel into place and ground the edge to a proper keenness.

And just like that she was done. She gave her finished sword a few test swings, it was weighted differently than the one she practiced with, but it felt good in her hand, she could turn this over to the supply chest without guilt. But first, she had some potions to brew.

Walking very carefully up the hill toward the shrine, Marilina carries all the ingredients that she needs inside her shell pouch. Holding very tight on her paws her shell making sure not to drop anything on the way.

“Oh, Triton guide my way up to the Shrine, you know how important it is to make this amulet in order to defeat this darkness that will not only will cover this land but also our beautiful waters. What will we do if the darkness takes over our sea water. The storm is approaching, we can feel it in the waves. ”

Marilina stops and looks over to the sky, closes her eyes and says a prayer. She continues once again, up the hill to the shrine feeling confident that together, everyone on the land will defeat this darkness once and for all.