Dove gets her self together as she grabs her little pouch, she begins to search out a few ingredients for the Invertitia.  Rayven takes some of the pain medicine that Cinn made him then slowly rises from the dinner table to prepare gathering materials to smith a blade.

Ella wandered around the mine for what seemed like eternity, not being able to tell 1 rock apart from another rock. In the process of trying her hand at mining, several things were broken – 2 fingernails, her 2nd favorite dagger, and her least favorite thing of all, a sweat. “How… do they… do… this?“, she huffed aloud as she fought to catch her breath in the dank cave.

Coughing like a sick dog and swearing and cussing, a completely dusty Cinnamon comes out from the cave system with a bunch of metals, goes to the forge and prays the gods to help her forging her first sword ever… “I swear this is not my thing, but we must do what we must do…” she says as she dusts off her furs.

A few hours and several attempts later, Cinn is finishing a sword… “Huh, not too bad for my first time” thinks, blowing on it an polishing it the best she can. Swings it once or twice… “At least it will poke an ugly orc eye out…”

Rayven stretches and winces a bit, adjusts his bandages, takes a bit of pain medicine and heads out to the mines.  A while later he has added a weapon to the weapon store.

Julala rolls her flowery sleeves up and gets to work….just because she’s Queen doesn’t mean she can’t get her hands dirty like everyone else.

She beats and beats at those rocks “phew…..this rocks are hard going” she wipes the sweat from her brow and sits to rest a moment “I wonder……..” she ponders “I wonder if a different weapon might be easier” She puts away her axe and pulls out another weapon from her bag….and starts again to get at those rocks “Oh! This is much easier” she laughs.

Making her way down to the blacksmith’s forge the Queen stops by the salt mine and the wood pile….”Probably going to need these as well today“. She never like killing the animals but when needs must….finally she pops all the components into the forge, stokes it up and awaits her Sword. “Hurrah…..gosh…the Smith really did a good job with these swords….” She takes the short cut to the members Halls but not before grabbing a few ingredients along the way. “There….another Sword for the Weapons Store!…..now…better get to finding the rest of those ingredients for an Amulet…..good job I know these lands well.“ 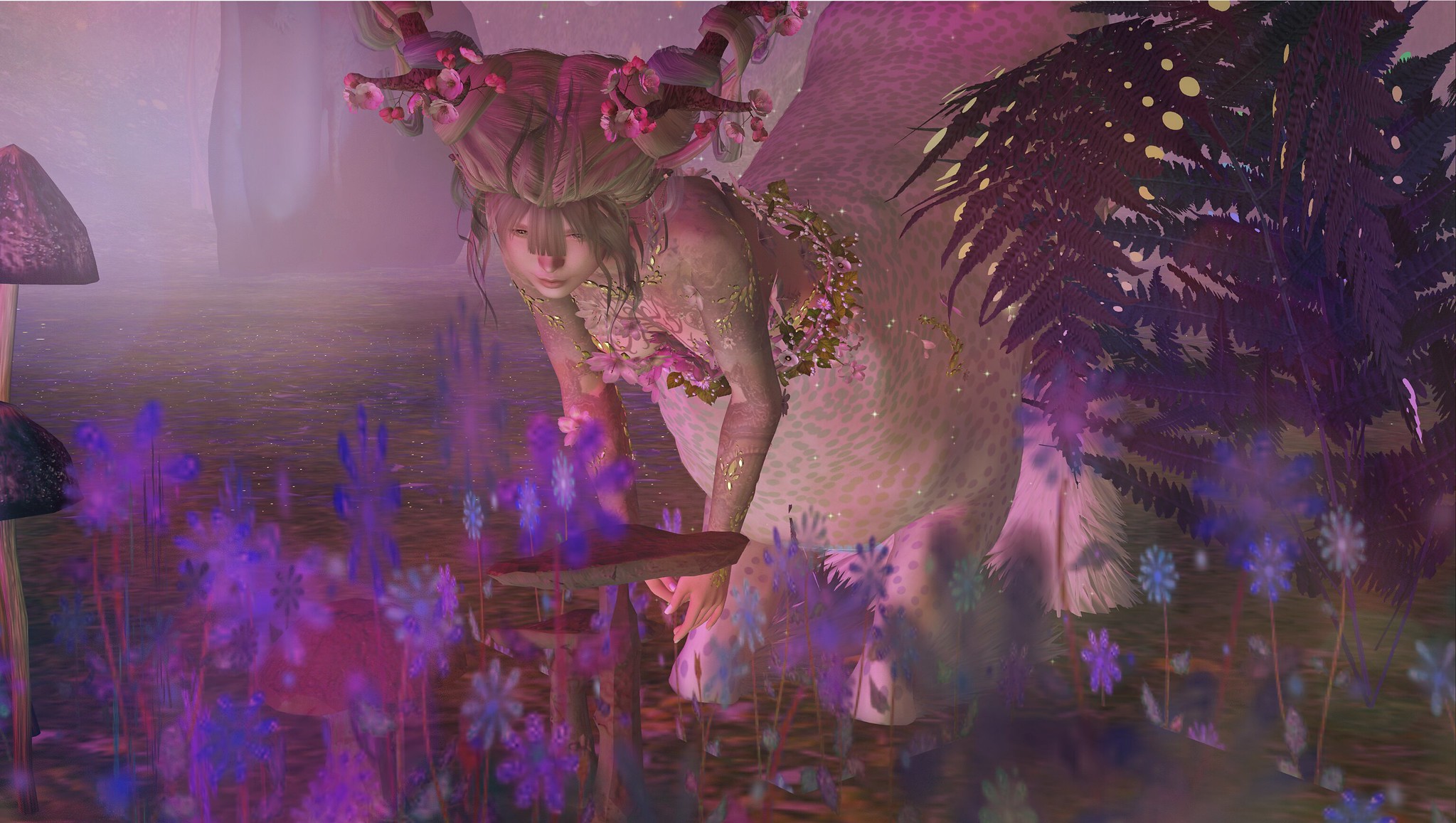 With sore knees from all that bending and foraging…..the Queen wanders over to the Moon Shrine and looks in wonder as an amulet is made “Such clever magicks” she smiles, carefully takes the amulet and carries it up to the members halls…..she’s almost reluctant to let it go it’s so beautiful…..but let it go she does…..adding another amulet to the store making a total of 10 amulets! “Wonderful!” she gasps “Everyone is working so hard!”

Marilina was so happy after she made her first amulet and have brought it to the Great Hall that she decided to go back to the land of Roonwit to try to find some toadstools since she was having some problems trying to gather them.

Once in Roonwit while waiting the healer came and stood next her. They both started talking and the healer explained about forging the sword.  Marilina decided to head to the mines to gather the metals, maybe she is able to forge a sword.

Once in the mines , she walks close to the stone wall and found some iron but there was a problem. Besides Marilina being so small and not to skillful with a weapon she then started to think on what she could do since the only weapon she was good at was with her Mer scream.

Marilina decided to give it a try, maybe if she screams strong and hard enough she will be able to break the rock and be able to gather some iron. But then she thought what if she screams and the mine comes down. She then touch the wall and looked around , everything looks so firm and also there is no other miner around, then she decided to give it a try and if the mine falls let it fall on her at least nobody else will get hurt. The least she knew was that she was not alone in the mine.

She then looked up and started gathering all the metals that she found on the mine walls.  When she was done, she turned around and found the Ranger standing next to her and her sister Persi.  Marilina apologized for making so much noise inside the mine, the scream must have sounded so intense and hard and with echo all around.

While standing next to both of them then she said “ I think I broke my neck”. The Ranger laughed and her sister wanted to know how I could such thing could have happened. Because Marilina was so tiny, the rocks were high on the wall , Marilina had to look up all the time. Once she was done she could not move her head to look straight nor down.

Now what she will be able to do she said “I think that I need to visit the healer now.” But how to get there if she can only stare up, she wouldn’t know which way to go? She then told her sister “ I can not find now the exit of the mine. “ Her sister, Persi then decided to help her out of the mine and then Marilina decided to lay down under a tree and wait.

Maybe by resting her neck will heal.

This was one of several trips Ella had made to this small shrine in the last few days. On the way she had a little small talk with a small barn owl named Donovan. He was an elusive little guy; She’s only seen him a handful of times. He was a quiet little thing and somehow completely oblivious to the things that were going on around them.

“Hey… hey…. why is everyone rushing around all the time now?“, Donovan asked, as sat perched on one of her horns.

“Oh, we’re working on potions and swords… the darkness is back… There is a slight chance that… SHE… may still be around… I don’t think she is, but…. I…. ugh.“, Ell said, trying not to get too bogged down in the unknown, “What we know for sure is that bad things are happening in the east, and its coming this way. We’re going to be ready.“

Once they arrived at the Moon Shrine, Donovan piped up again, “What?! What is this? When? Has this always been here? How have I never noticed this before? Is this new? Where did this come from?” he asked, obviously bewildered.

Ella fought desperately to suppress her laughter at his reaction, but a couple giggles slipped from her lips despite the struggle. She thought for a moment, “Ya know…. Now that you mention it, I don’t remember ever seeing this before either… But, to be fair, I NEVER come up here. I’ve never had a reason to before.” 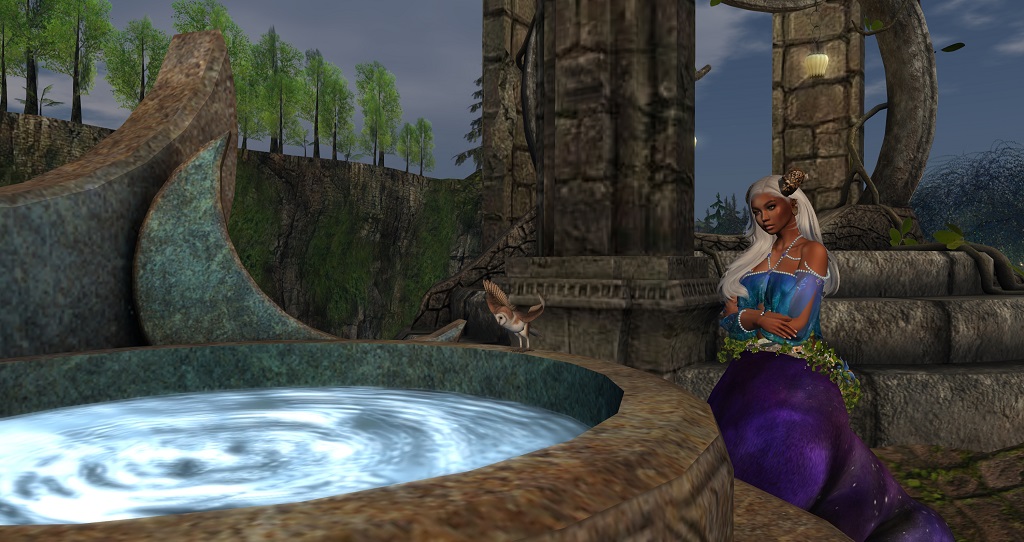 Donovan moved from her horn to perch on the edge of the shrine, peering into its shiny surface. “Careful, I’d hate for you to turn into Invertitia too, Donovan!“, said Ella.

“Invert WHO?! What’s a Teesha? What are you talking about??“, he said as he spun his head around to face her, staring at her with wide eyes.

She clapped her hands to her mouth, in an attempt to hide her laughter. It didn’t help much. She was laughing hysterically as she tried to answer him. Donovan watched with his beak hanging open, “You’re laughing at me!” he squawked. “Hmph! So rude!” He flapped his wings lifting into the air and began to fly away. As he went, Ella called after him, “Donovaannn!!! I’m so sorry! It was just so funny! I promise I’ll fill you in on everything later!” She heard a tiny “Hmph!!” in the distance, and giggled just a little more.

Lil Cinnamon gathered the last ingredients for the fourth part of the potion, with a smile of satisfaction in her face. Reading and rereading the recipe, which she knew by heart by now, but checked twice and thrice out of a good healer’s habit, she made sure she had all the ingredients she needed “Now THIS is my cup of tea” …said with a big smile in her face. “I can do this all day!” She thought as she worked in the cauldron in Roonwit.

On her way out, she found Marilina, who was sitting on the ground, patiently, while waiting for the toadstools to grow. She took advantage of the encounter to exchange some green algae – very much needed for the mixtures and out of the reach for most of Centaurians, as it could be harvested only under water – for toadstool and some minerals from the cave. Then she went to the Moon shrine, to start making her amulets.

There was a bit of a waiting line, as everybody was deeply committed to the task. “It is a nice shrine, isn’t it?” she sighed to herself “…Sometimes I wish I had a Roonwit’s magic, hehe…“

Once her turn came, she placed all her ingredients in the right order and in the right amounts on the ground next to her. Then extended the parchment with the recipe by her side. Closed her eyes, and started the spells, adding all the four mixtures, one by one. Finishing the task, with the last spells, the Moon Shrine emitted a soft and mellow sound of magic, as the water in it started to glow.

Sitting back, she waited for a few minutes, the sound slowly faded away, and the glow in the water was gone. Reaching at the bottom of the pool, rescued a beautifully made amulet, with a liquid-looking stone glowing blue.

Holding it in her hand, she thought “Wow, this is such a beautiful jewel! …Kumi really outdid herself!” Tucked the amulet in her pouch and headed up to the Members Hall… 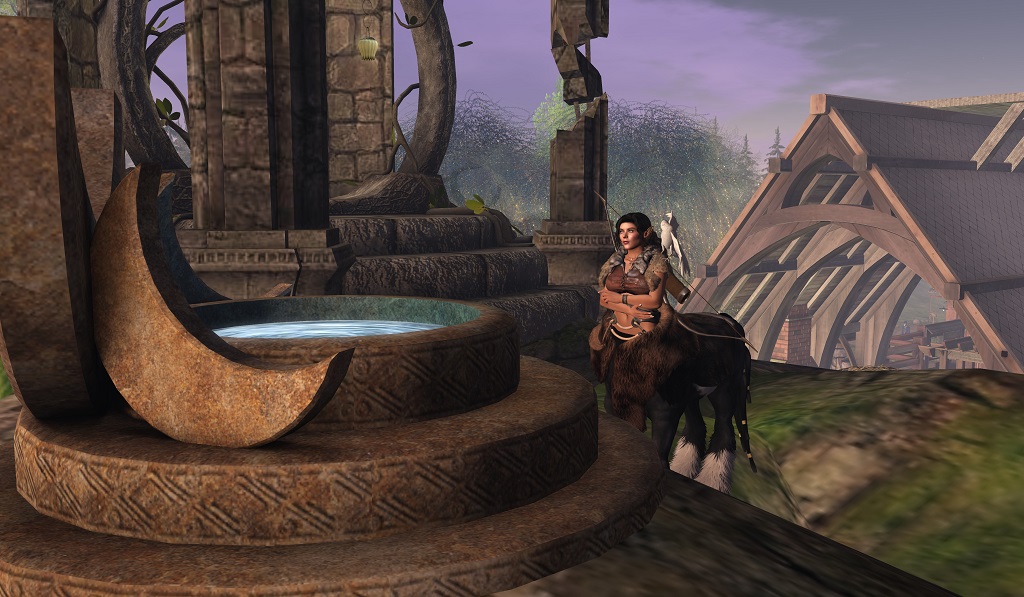 Valiav wasn’t around for the great war but she knows very well that the darkness is not a good thing.  She skitters her way around Centauria collecting ingredients, she’s familiar with most of them and had a good amount on hand.

After a large number of explosions, several detours and a fun conversation sparked by an eye of newt she finally had all she needed to make an amulet. She puts all the parts into the shrine, waiting with held breath and mind full of anxiety.

She jumps for joy as the amulet comes out completed “I DID IT!” immediately rushing off to show the people that helped her along the way and to deposit it! 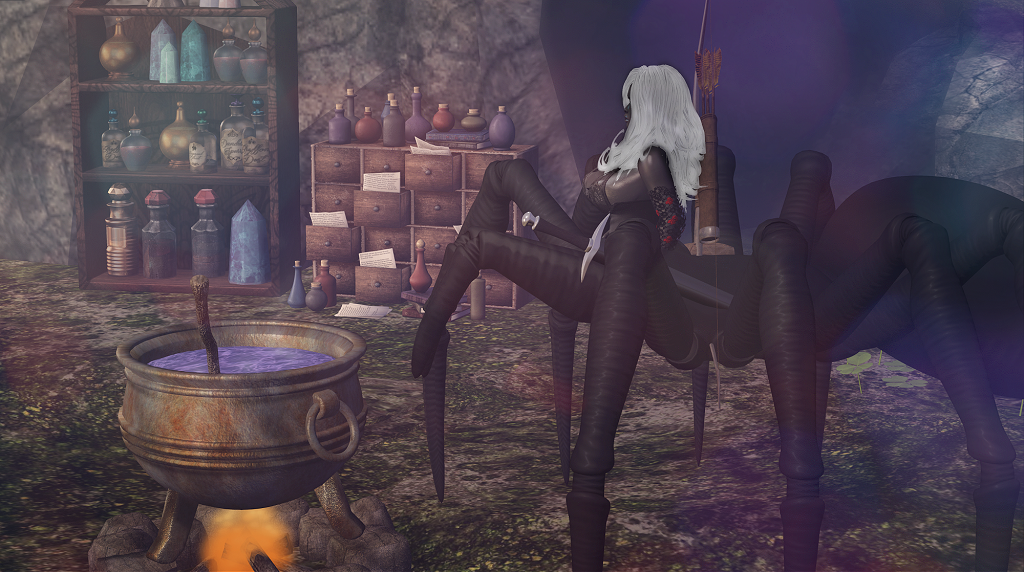