Cinnamon walks out of her house and as she turns the corner, runs into Queen Julala. “Your Majesty!!” Says, surprised to find her in the middle of the road, and squinting her eyes, notices Orion and……Rayven? walking towards them a few yards behind her.

“Lil, forgive the intrusion but I felt this was just too important to wait, I’ve gathered the others. Perhaps we could come in and discuss the news I have?”

Cinnamon opens the house door. “Come in, guys” She eyes an oddly small and ….green Rayven as he trots by…… 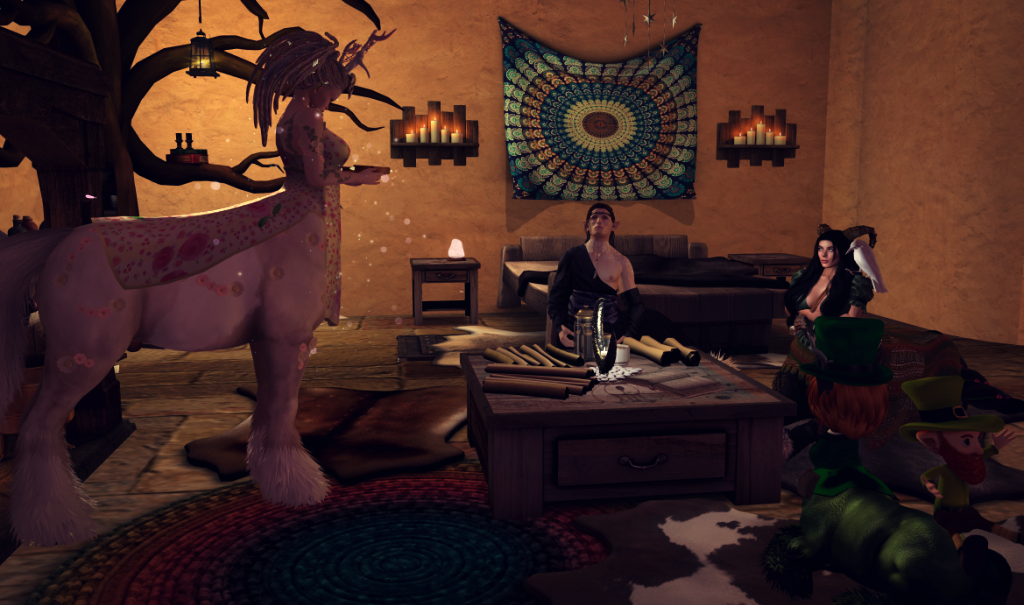 Julala Demina: Thank you for coming everyone….and with such urgency… I have news!

Orion Firebrand settles and looks expectantly at the Queen.

Julala Demina: I have heard back from the Fae…you remember I send message to the Seely Fae of Longridge to ask for any information about… Hopping Jack

Lil Cinnamon’s eyes widened “Oh? What did they say??”
Julala Demina: Well…
Rayven Firebrand: You have my attention
Julala Demina: I think this is very important information to our creating a plan for how to deal with Hopping Jack

Julala Demina: The fae say that the stone… the stone that Jack took… that stone is actually very hazardous to the fae! All fae!

Lil Cinnamon gasps. “Your Majesty….” she raises a hand.

Julala Demina: You remember in the legend….the fae would not allow Jack to put the stone back??? …Yes Lil.

Lil Cinnamon (leel1980): I should point out that Emily’s letter mentions to seek for the stone!

Lil Cinnamon: Is THAT stone they refer to?

Julala Demina: it must be!

Orion Firebrand: Is it like iron, that it repels them?

Lil Cinnamon takes out Emily’s letter from the pile and reads: “The letter reads: The only things that I got from them were ‘The stone is the key’, ‘Seek the stone’, ‘The stone will save you’ ”

Julala Demina: The reason the unseelie fae didn’t allow him to put the stone back is BECAUSE it was poisoning the water!

Rayven Firebrand: So him pulling the stone from the pool was actually a good thing?

Lil Cinnamon: Ohh… by the gods!

Julala Demina: “Exactly! the stone was poisoning the waters of the unseelie realm!” Julala continues to read from the parchment from the seely fae.

Orion Firebrand shakes head in thought. “Why would they.. punish him as they did?”

Lil Cinnamon: Yes, how?? Or why is Jack stuck with a dark fae curse on him?

Julala Demina: they suggest… that when the unseely fae saw that Jack took the stone …they thought he must have some great power or immense strength and that is why they cursed him, not because he took the stone. He actually did them a favour! They cursed him because they feared he was powerful and a threat to them!

Lil Cinnamon shakes her head… “I don’t get it… They should have rewarded him, not cursed!… Oh…”

Julala Demina: I guess they didn’t know that the stone does not affect non-fae…

Lil Cinnamon sighs… poor Jack. and Here I was thinking about how mean he was… I feel bad now

Rayven Firebrand: Now I pity him.

Julala Demina: He was just an innocent Jack-o-Lope who picked up a shiny stone in a clear pool… and got cursed for a reason he doesn’t understand. He thinks he was punished for stealing the stone. I think this information is hugely important to us

Lil Cinnamon thinks about Emily’s letter. “Alright so…. let’s say we seek for “that” stone. What do we do with it? Do we tell Jack? should we take it from him?? do we ask him for it??? But of course, how do we do all that, if we don’t even know where Jack is at this time.” She sighs.

Rayven Firebrand: So the question now is, what do we do? Curse or no, he is still a menace and Ostara is nigh upon us.

Lil Cinnamon: “Yes… a week from now…” Cinn thinks for a moment. “Rayven?”

Lil Cinnamon: Would you say, Black Spire was relatively “safe” during Ostara and Samhain?

Rayven Firebrand: Black Spire was the only township that was safe, because they placed out candy and shiny stones as an offering twice a year.

Lil Cinnamon: “Your Majesty, Blackspire is the only town that sets out an offering to Jack… according to their version of the tale.” She picks up another scroll from the pile. What if we did the same??

Orion Firebrand: Could we.. leave a note?

Julala Demina: I seem to remember we talked about this before

Lil Cinnamon: leave a note, try to talk to him somehow…. he should know about the stone!

Julala Demina: a note to Jack?

Lil Cinnamon: I bet you all my obols he has no idea

Julala Demina: I am positive he doesn’t know… So… we leave a tribute? and leave a note with it?

Julala Demina: I mean….we talked before about setting a trap

Rayven Firebrand: With his avian jailer with him he will know that we are gathering an offering and wait. From the report you all gave me after Samhain, he would prefer an easy score.

Lil Cinnamon: well.. yes and no…. we would be doing this again in Samhain. Because the curse would not be ended…. I am not even sure how his curse could be ended.

Lil Cinnamon: “I wonder if the Roonwits could make him an amulet, or use their magic to break the spell…” she lifts the parchment again “…maybe using the stone”

Julala Demina: If he has his jailer with him though… This complicates things

Orion Firebrand: True, we don’t know the raven’s intentions at all. But perhaps the raven doesn’t know about the stone.. either?

Rayven Firebrand: But… do we do this twice a year and be held to it like Black Spire? Or do we use this as a method to end the menace?

Lil Cinnamon: Well… it would be a better outcome if we try to end the menace. We need to talk to some of our druids and see if it’s possible.

Julala Demina: We also need to think about how to trap Jack then. And this will be the best opportunity.

Lil Cinnamon: That would probably have to be another task for the Roonwits…. as fast as he is, I am sure the only way to capture him is with magic.

Julala Demina: I will talk with Dragonwolf….I’m sure he will have something he can come up with.

Lil Cinnamon grabs fresh parchment and starts making notes. “As for the trap… and attracting him to it… we probably need the help of the community to craft a lot of candy… and a lot of gems, from the mine”

Julala Demina: Lil are you able to gather some of your wisest Cloudbirths…and work through all these papers?

Julala Demina: good… I will speak to Dragonwolf… Ok, this is good… we have a plan. Let us go …we have much to organise.

Rayven Firebrand: So we have a plan.

Orion Firebrand: Of course, thank you, my Queen!

Lil Cinnamon: Will do, Ranger. Orion, would you mind staying and helping me with all the scrolls?? There’s much to read.

Orion Firebrand: Of course, I’m.. er.. not the best at reading but I will do my best.

Rayven Firebrand: Well on that note I need to go and watch over the kingdom. He eyes his brother… “Say nothing…”

Lil Cinnamon: “About what? About you being small and green?” She burst out laughing.

Rayven Firebrand pounds his fist across his chest… “Until next we meet.”

Lil Cinnamon laughs even more. “Ray, before you go, take a bottle of Taurenol from that shelf… oh wait, you can’t reach… I’ll get it for you”