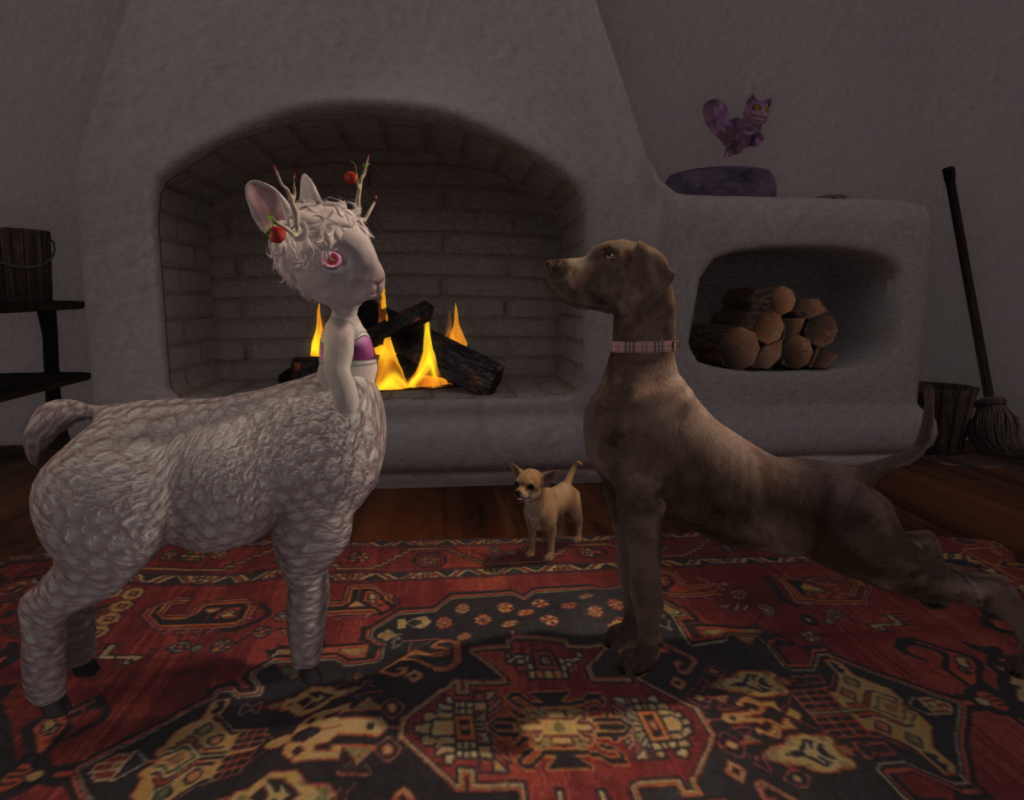 The shape-shifter Humormii wasn’t always an alpacataur. She didn’t actually remember what her original form even was. More often than not she took the form of an elf and wandered among humans with her two mutts, Nellie and Mouse, but rarely felt as though she fit in anywhere but with her dogs. Sometimes she wanted to be animals! Sometimes she wanted to wear strange clothing that the humans didn’t understand. She was in a distant land at the time of the battles with Vitrollia, and only knows the tales now from her time at the Centuria Tavern and the stories of her centaur family.

Her alienation among humans led her to wander, taking long roads usually by moonlight because her skin would burn in the heat of the sun. At one point she came across a kindly old human lady who didn’t bat an eye at her changing forms and found her quarks endearing. She spent many months with Hester, who was ailing. From Hester, Humormii learned of plants and medicine, as well as tending a garden. It was a happy and quiet time, even with the glimmer of impending loss in the near future.

Among the animals that Hester kept, was a beautiful and sweet tempered alpaca. Humormii adored this animal and spent many hours combing its soft woolen coat. Hester wanted deeply to visit her family in the far off city, and she missed the days that she could travel to admire the wares behind all the shiny glass windows of the market streets. Supplies of things like flour and sugar were low, and Humormii was going to take the herbal medicines the pair had made to the city to sell and bring back what was needed when an idea struck her.

She packed their goods on the back of the alpaca and transformed herself into an alpaca, but with her usual elven torso where its head would be. This way she was free to use her arms and could more easily hold Hester steady on her back. She led the alpaca down the long rocky trail to the road and followed the road all the way to the city. The bustling people stopped and stared at the old lady and the alpacataur. Even though it wasn’t uncommon for non-human creatures to venture into cities periodically, they had never seen an alpacataur before.

Hester’s grandson Gavin, a strapping young man of 22, came running up overjoyed to see her and didn’t notice the odd creature that brought her to him at first. He tripped on his tongue as introductions were made, and helped Hester onto Humormii’s back to take her to their family home. The family stared at Humormii like a circus act, and she took her usual elven form which eased their minds a bit. After lunch Humormii took the alpaca to the market where Hester’s medicines were sorely missed, and did the shopping. They spent a fortnight with the family before returning to the house up the rocky path far from the city.

Two months later Gavin came to stay with the pair and help take care of his grandmother, who had taught him as much as she could throughout his life about plants and medicine. It would be a good trade for the young man, since his family and Hester in particular had a good reputation for quality herbal remedies. But Hester did not live long after her grandson came to stay with them. A week, and the frail lady was gone to a grieving pair of strangers. They buried her under the shade of her favorite tree and said their farewells. Gavin stayed to continue his grandmother’s work and Humormii moved on, taking her memories with her. 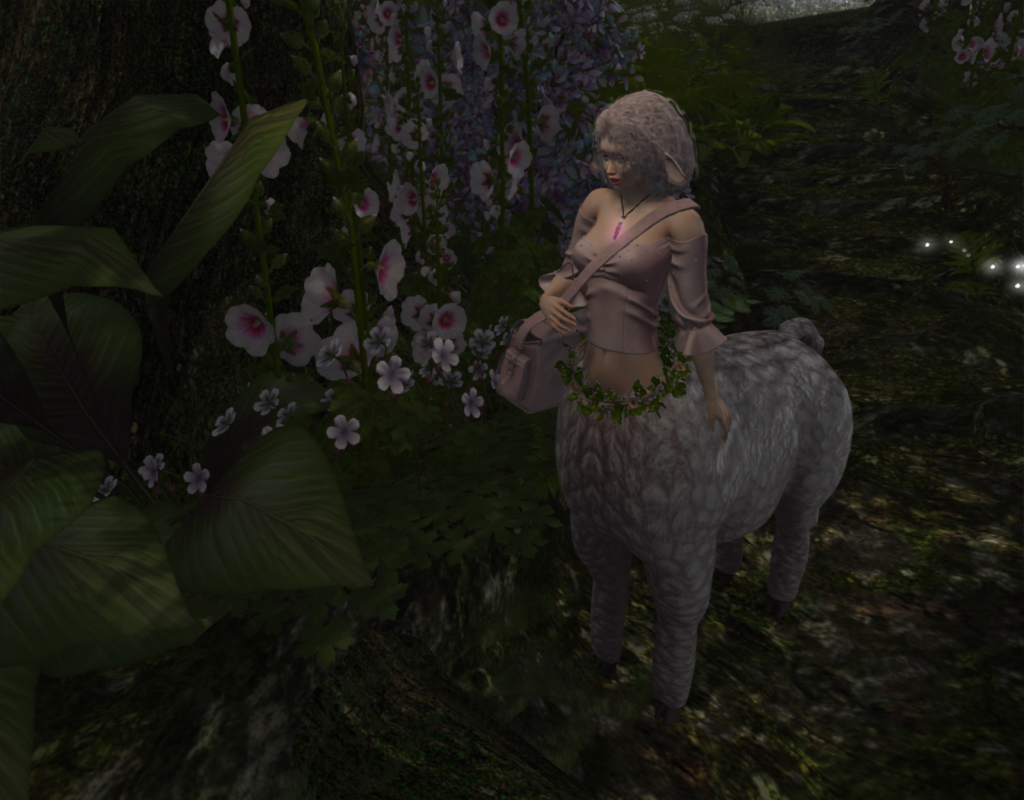 Down long roads in the moonlight, Humormii gathered herbs and wandered until she came across an almost unoccupied dwelling dug into the side of a hill. She spent several days cleaning and building a fence to keep her two dogs from running off. She prepped the long forgotten garden for vegetables and set up her lab for making the remedies that were Hester’s legacy and to experiment to find new ones.

The only drawback was a strange creature that apparently had lived in the old earthen dwelling before Humormii found it. It was a large purple cat with a great moon smile that cackled and liked to blow up her experiments and play mischievous tricks on anyone who passed by. She had read the stories of Alice and Wonderland in her wanderings among humans, and suspected this cat was a relative of the Cheshire Cat from that story’s lore. She affectionately and exasperatedly called him Chesh. But even the cat had his up sides and Humormii decided it was well worth the price to stay here. He had an aptitude for combing out frizzy hair and wool, and kept her dogs occupied during long hours of work. 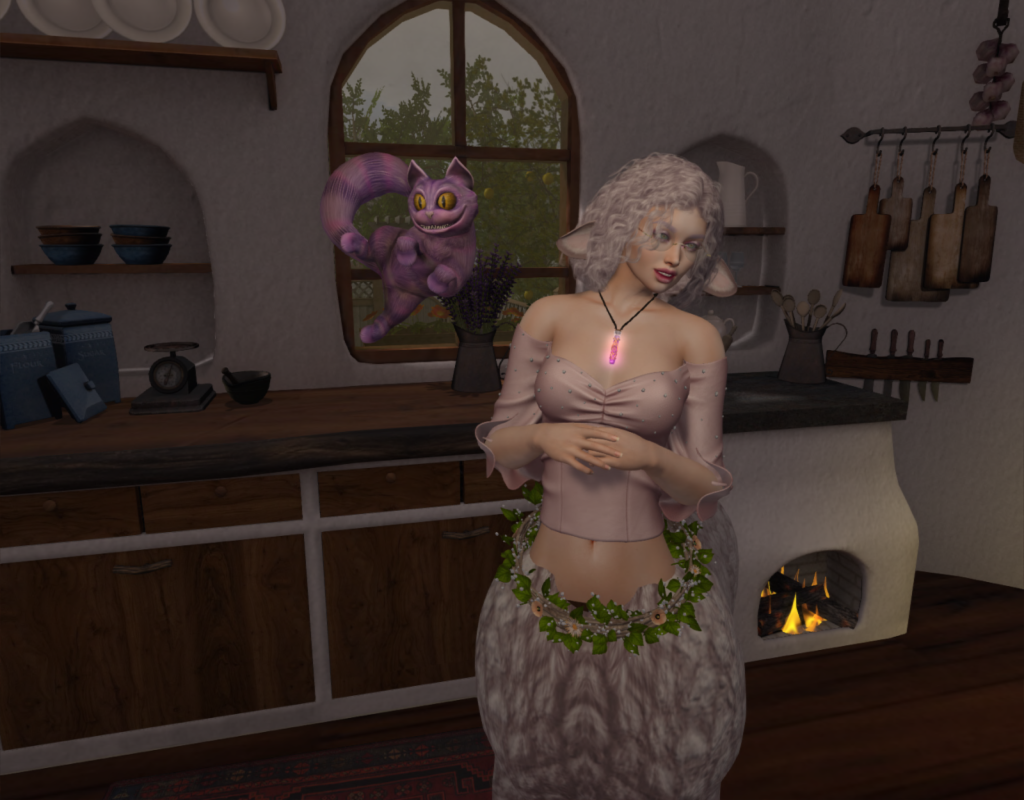 While Humormii did all this the most amazing smells wafted from nearby… delicious foods and coffee… Curious, she wandered down the road until she came upon the source, a well kept and large home. Wandering in and out of the home were Centaurs! And one tiny Cervitaur who clearly ruled the roost. She was shocked and delighted by them! Humormii watched them for a time, before building up her courage to knock on the door.

It opened and there was Emily, with fresh made cinnybuns and coffee waiting. She wasn’t alarmed by the alpacataur in the slightest and welcomed her inside. It wasn’t long before Humormii knew she had found the place she truly belonged. She had a family among centaurs in her new parents James and Emily, and her new siblings Rayven, Ailbe, and Byz.