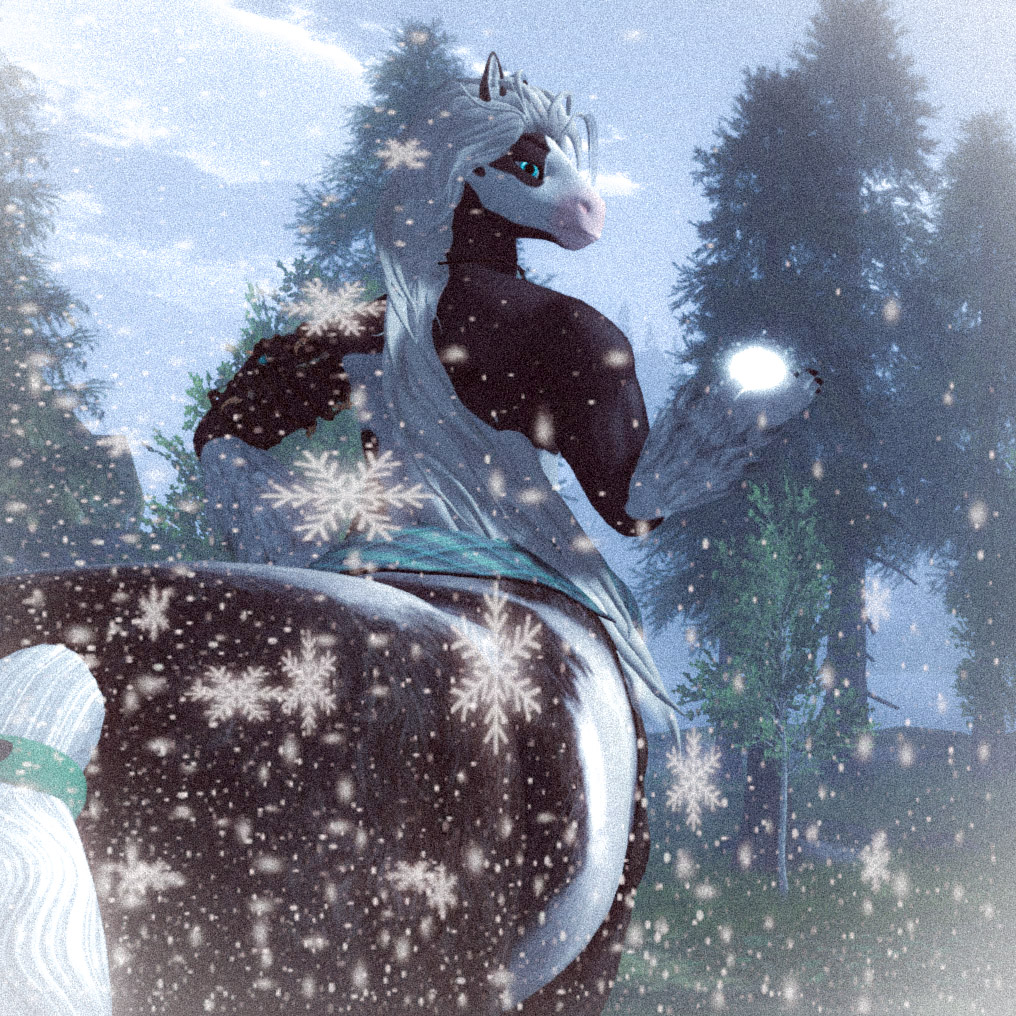 I was born as part of a centaur clan which dropped the nomadic lifestyle and settled down somewhere northbound by founding a settlement named Hoyshire. My childhood was ordinary, based on the circumstances. And my teenage years too.

However, when I was 20 years old, a sorcerer settled down in some old ruins near our settlement and enslaved us to be his minions. For 5 years, we went through hell. Then we tried to revolt against him, but we underestimated him big time. He wanted to make sure that this was our one and only big mistake and tried to transform us into regular horses. But Transformation wasn’t his specialty, and we ended up as equitaurs / horsetaurs (whatever you wanna call it. Both terms go.) He also casted a strong blizzard around our territory, as Ice magic was his specialty, and to lock us in. Some tried to escape anyway, but as soon as they entered the storm, they froze to death within a few minutes.

One day, the sorcerer discovered the lair of a white dragon in our territory and set out to fight it. In the past, he proved that he can do such tasks within minutes. But even after months, he didn’t return.

Some of us took the opportunity and went up to his quarters and raided it, hoping to find something to undo the blizzard, but especially our transformation. While the others kept looking, I decided to head out and find out what happened. Without anyone knowing, and with a map that we got, I sneaked out of the settlement to find that dragon’s lair.
After some days, I reached a mountain, which laid at the edge of the blizzard locking us in. I followed a rough path up the mountain until I reached the entrance to the cave. 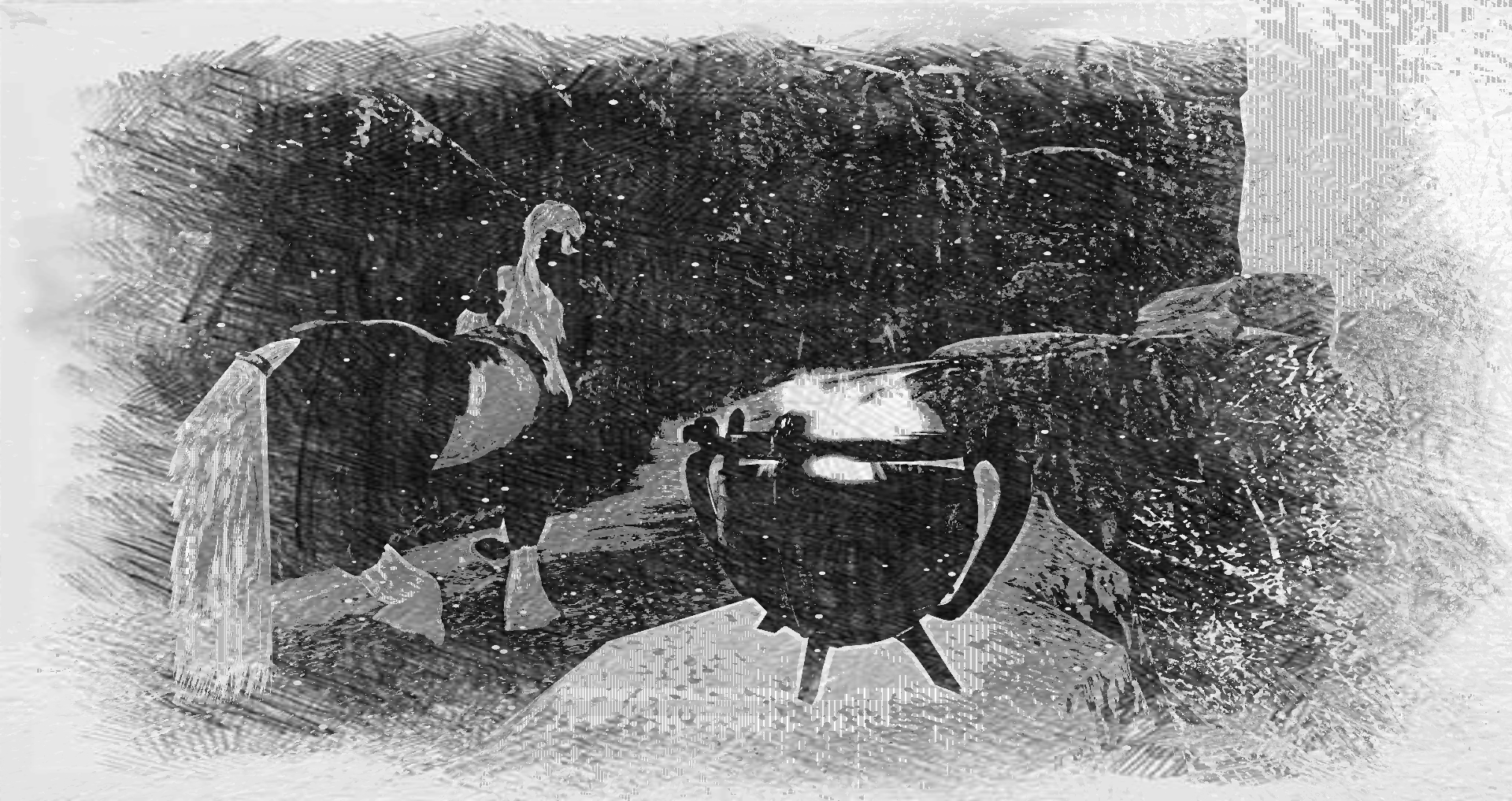 After I entered and followed the only path into the mountain, I entered a huge room with bones laying around the floor. But what caught my eye were the two whole skeletons. One was the one from the dragon. Huge, long (kinda like a snake) but still with limbs and a horned skull. The other one was human. Rather normal, wrapped in robes and holding a staff. It was the sorcerer, of course.

The staff in the sorcerer’s boney hands glowed and there was a stream of energy coming from the dragon’s skeleton, slowly being absorbed into the staff’s tip.

I didn’t know what was happening atm as the empty sockets of the dragon’s skull began to glow as a pair of astral eyes formed and then fixed on me. 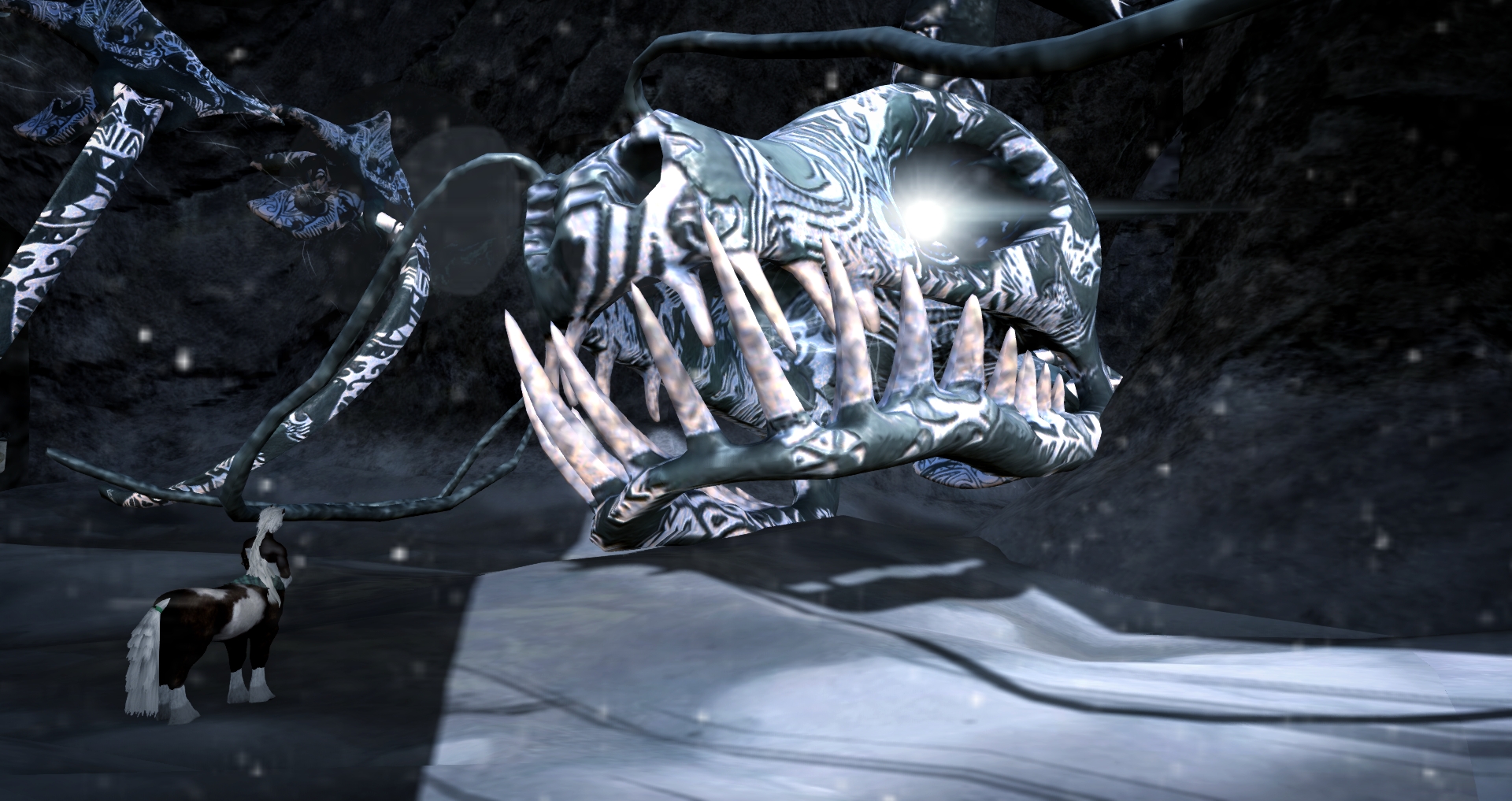 The dragon, or at least, it’s soul, was still there. It told me that the sorcerer tries to absorb his soul. The sorcerer himself locked his soul into the staff before his mortal shell gave up. If he would have succeeded, he would have come back as a Lich, more powerful than he was when alive.

I knew that this would only worsen the situation of me and my clan. The dragon asked me if I’m ready to help him to destroy the sorcerer once and for all. My clan would be freed and he wouldn’t be absorbed by some “soon-to-be” Lich. I was skeptical, but agreed. But to fight against him, I had to let my soul be absorbed into the staff too, by grabbing the staff. It was risky, but the only way AND our only chance.

So I grabbed the staff, and mine and the dragon’s soul got sucked into the staff.. We immediately appeared in front of the sorcerer, who was surprised to see me too. But he was very confident, thinking he would have the higher ground against us.

And so we fought with all we got against him. For AN ENTIRE YEAR!!! (Since I had no mortal shell that could tire up, it wasn’t as hard as you may have thought.)

It was a hard fight, but in the end me and the dragon managed to defeat him by destroying and banishing his soul into the void.

Since the dragon was now trapped inside the staff, he told me to break it to release him. He would reward me, if I do so. Here, I was skeptical too, but agreed to it. So after returning into my body, I took the staff and broke it on a rock. To my surprise, the dragon kept his promise and granted me his magical ice powers and added that with that I also absorb the ice powers that were inside the staff before he left into the afterlife. 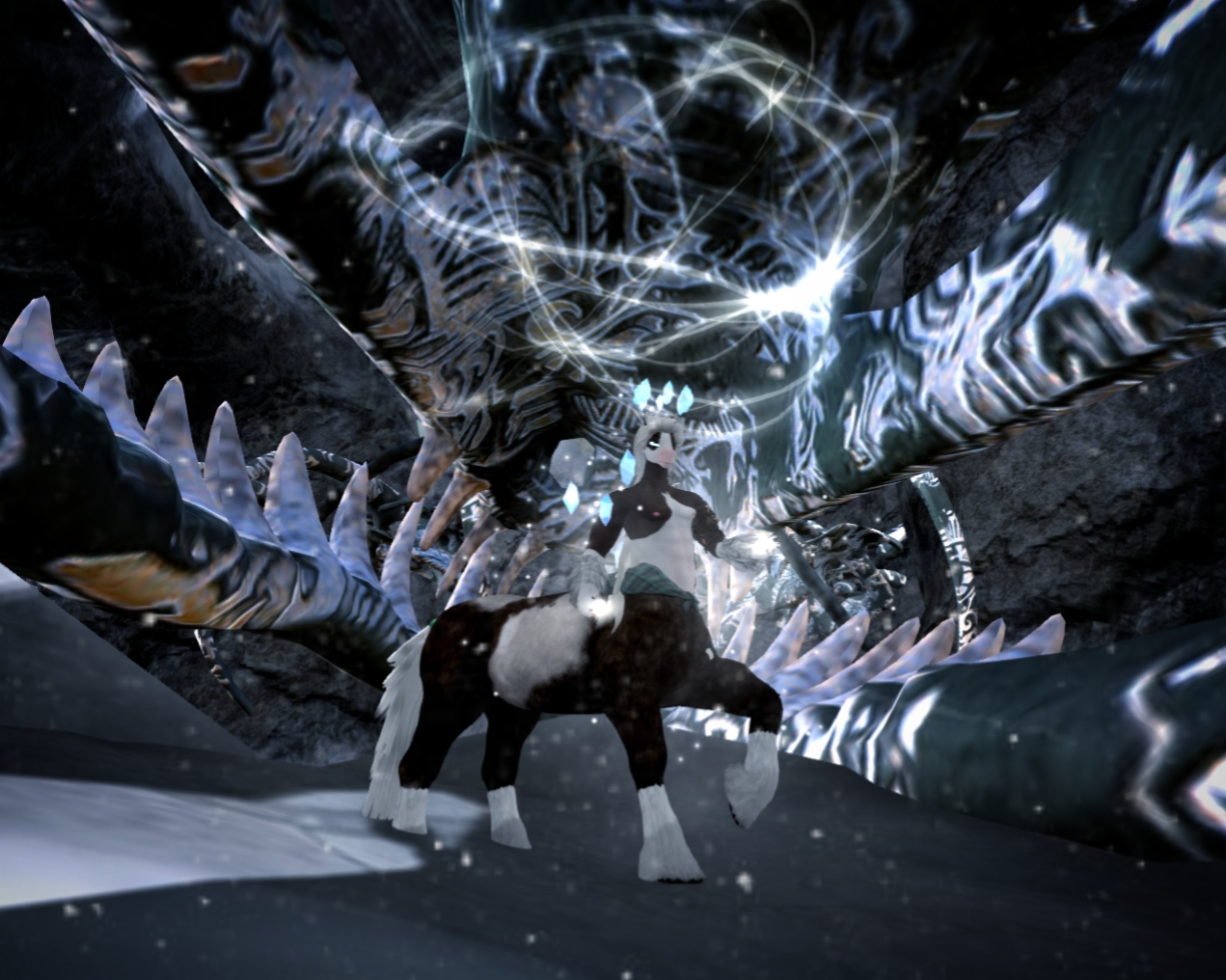 The first thing I did was to let the blizzard around our territory disappear, before returning to my clan. They didn’t expect me to return. But they were overjoyed about the news of the sorcerer’s defeat. However, this victory had an overall bittersweet taste. We may have won, but we’re stuck as equitaurs / horsetaurs.

After around 9 months, normality returned to us. Traders and visitors, who knew about us prior (before the sorcerer came here), were surprised about the changes, but over said months, they got used to it. Actually, because of our new looks, we have more visitors than prior. Trader, bards,… everything. 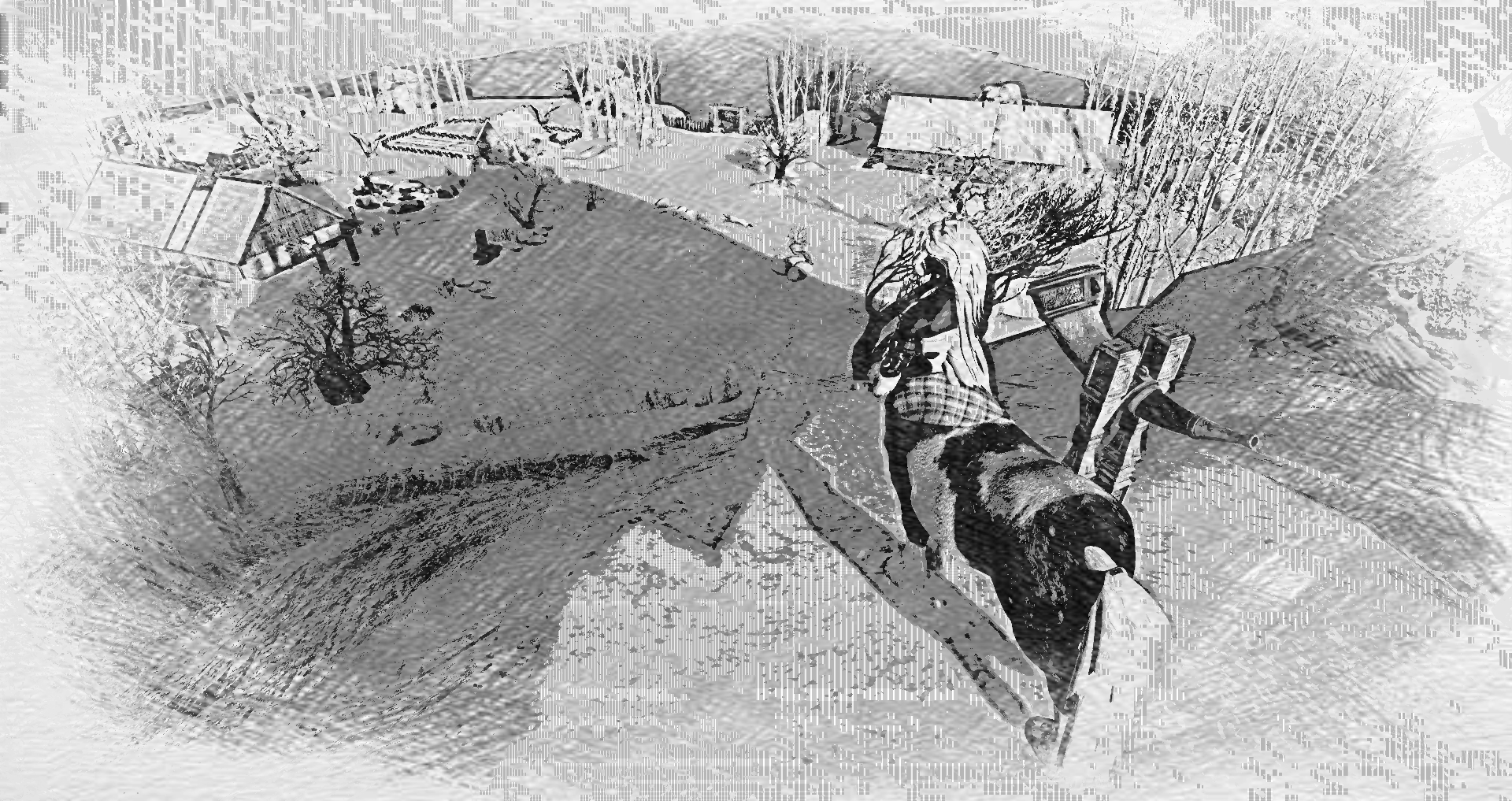 However, I was longing for the unknown of the world. I wanted to see what’s out there, what’s beyond the horizon. So I decided to pack my stuff, and leave my clan and settlement for an unknown time. I don’t know if I will return. And even if, will it be for a visit, or for good? Let’s see what life has for me.