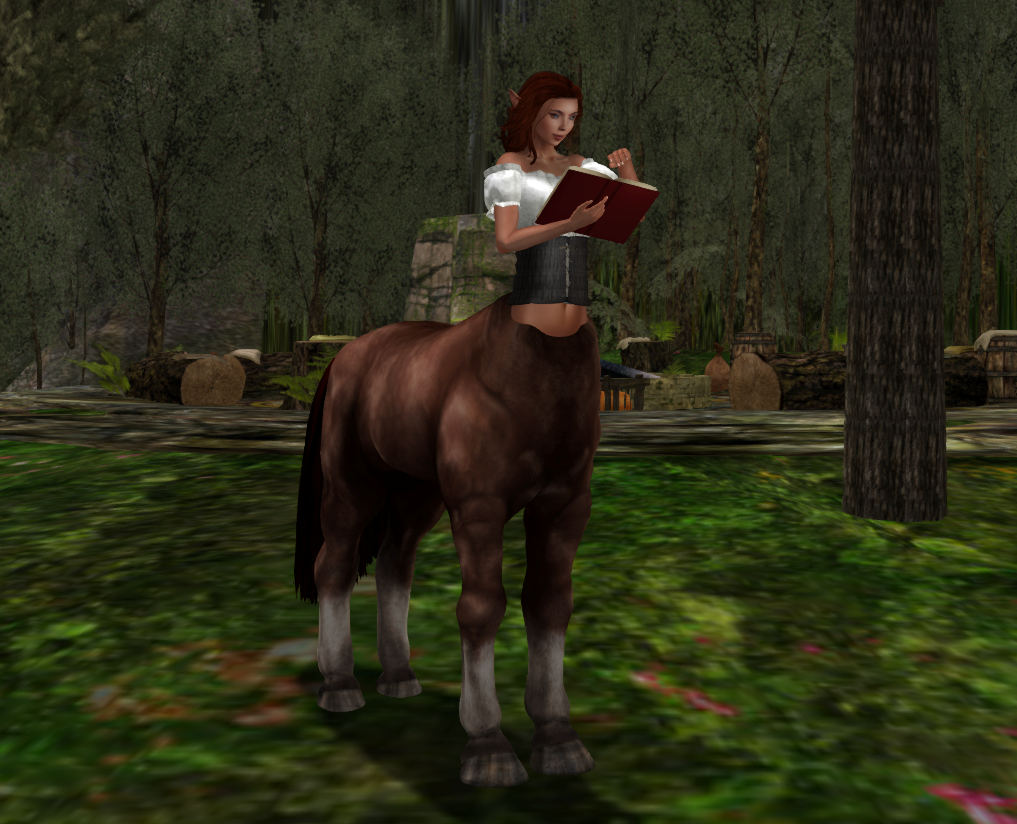 A young Keshina was sent out by her village elder and healer to gather plants as part of her apprentice to him. She spends most of the afternoon wandering the hills and woods looking for more rare and exotic plants and mushrooms. By the end of the day, she has gathered several plants for the healer and returns, with her bag of plants, back to the village. Crossing over the last hill, she sees heavy back smoke over the valley where her town is built on. Concerned about the evil-looking, thick, black smoke covering the land like a shroud, she hurries to the village, where entering, she is greeted by a scene of slaughter, with buildings razed or in flames, bodies hacked and mutilated, with some even tortured or butchered for food.

Moving through the carnage, she searches for any survivors but finds all of her family, friends, and townsfolk dead. With a face blank of all emotions, she begins to gather the bodies to the central square where she arranges her people, in the manner taught to her, for final rights and prepares the town square to be a funeral pyre for the townspeople. As she searches the town, she also discovers that the town’s secret store of winter supplies was not found by the murdering raiders. After cleansing and preparing the townsfolk for final rites, she returns and begins gathering provisions to leave before burning the town. As Keshina goes through the cellar of town supplies, she finds a large store of medical herbs and kegs of wine stored in the cellar for the spring gathering of renewal.

As Keshina looks at the stack of goods she begins to form a plan of retribution for her slain people. With only some basic knowledge learned helping the town healer begins cooking the more dangerous herbs, used in a diluted form to numb pain and induce sleep, and pours the potent extract into the kegs of wine and reseals the kegs. Then she next finds an old farmer’s cart and coats the bottom with straw and pitch used to start the great fire at the beginning of the village’s ceremonies. Finally, she covers the pitch with more straw and sweet-smelling flowers and plants to cover the smell of her firebomb. With great effort, she next loads the poisoned wine and other items not needed for her trip onto a farmer’s cart and pushes the cart out of town following the raiding party tracks.

When she finds the raiding party of orc cutthroats, she kicks the old wheel on the cart to make it look like the wheel broke from the weight of its load and makes enough noise to attract the raiders’ attention. When the orcs come into sight, she pretends fear and abandons the cart with the poisoned wine, and flees to an area of rocks too narrow for the chasers to enter. After a while, the enraged orcs stop searching for her and return to her broken-down wagon. Waiting to make sure that the orcs have found and consumed the wine, she quietly sneaks back to where she left the cart, seeing the raiding party has indeed, broke open the wine casts and have drunk the poison vintage. Keshina quietly observing from the bushes, watching until they have all slumped over the cart and wine, unconscious from the effects of the poison.

With the cold unemotional look of one who has lost all, she lights a torch and flings it into the cart, lighting the pitch-soaked straw. The lit pitch and straw’s flames quickly spread, causing a great fire to consume the cart and those near. She watches without a word as the murders of her village are consumed by the fire, showing no mercy as some of the raiders cry out in pain before being consumed by the flames.

Quest for a Home

Returning to the town, she gathers the supplies she has hidden, including her grandmother’s armor from the Great War, and other small personal items from her family. Lastly, he snips off locks of hair from the villagers braiding them into a fine rope that she rolls up and ties to her father’s sword belt which she put on as well. With the last of her preparations done, she prepares the funerary pyre and begins the ceremony, as best as she remembers, to cleanse her family’s souls so they journey into the next life. Sometime during her prayers the pyre springs to life in a fire of almost white flames consuming the village completely. Keshina is driven back by these flames to the outskirts of the village. When the fire finishes consuming the village, the white flames die down leaving nothing left of the village but fine pure white ash but leaving the surrounding forest unharmed. Only when Keshina sees the white ash that was her village, her family, and her kin, does she collapse in a heap of sobbing tears.

After a while, Keshina dries her face and looks about the forest. In the clear cool night, illuminated by the full moon and bright stars, Keshina sees a while great owl trimmed in gold. Looking in wonder at the owl, they both seem to speak without words then the owl screeches a reply to Keshina and flies away. After the mysterious burning of the village, she takes the owl, a symbol of the village’s patron goddess Athena, as a sign and travels in the direction she saw this wondrous bird went. During her travels, if she had a question of where to travel next, the owl always appeared and shown her the way until she found her way to a new land and family.