As the first spring rains fell on the forest, in a small shelter made from a large fallen tree, a large stag cervitaur held the hand of his wife as she labored to give birth to their newest child.

Their 4 sons were outside, waiting on news, and praying to the gods for the best. For this child was coming prematurely. Caledi was not due for another 2 months. Eurair murmured words of encouragement as Caledi struggled to bring the child into the world. Finally, after countless hours, the smallest of cries could be heard coming from the shelter, and Eurair stepped out to address his sons “You have a sister,” he said. “She is quite small, and weak physically, but it is obvious already she has a very strong spirit. It is up to all of us to protect her“. The boys nodded solemnly as they vowed in their hearts to keep harm from their baby sister.

“What is her name, Father?” asked the oldest, and all 4 boys nodded at the response: “We do not know. It has not come to us yet, as we were not ready.” The boys stepped into the shelter to see their new sister, and all 4 tilted their heads in confusion as they looked at her. “Mother,” the youngest boy began, “why does she have elven ears?“, putting to words what they were all wondering, including Caledi.

Suddenly, tiny orbs of light could be seen outside the shelter, hovering for a minute before one entered, and a small faery appeared, moving to each family member in turn and whispering one word into their ears before flying over to hover above the infant, addressing the entire family:

“This young fawn was chosen by the gods to be touched by the fae whilst still in the womb. She is born to be a natural caregiver, and will be a blessing to those in need. Do not be alarmed at her ears, they are a symbol of her blessings. Her true name that I have told you all shall be kept secret, and she will be known as Emily, for she will excel in all she strives to do.“

The faery then flitted out of the shelter, and the orbs of light disappeared.

As Emily grew, she discovered she had the ability to change her fur and hair coloring with the seasons, allowing her to more easily blend in with the environment to avoid predators. She also learned she had a natural talent and love for cooking. And her food became popular among the herd. She stayed small in size, but all who knew her knew she was smart, and had a big heart with endless love to give, and she was very feisty.

One day while wandering through the forest in search of herbs and flowers, Emily found herself lost, and grew scared as the sky turned dark. She started crying softly, and then heard a small rustling of wings near her. Suddenly, a small creature appeared, with the head, front legs, and wings of an out, but the body of a tiny lion. Emily knew immediately that this creature would help her, and indeed, the owl-gryphon guided her home. Emily named the creature “Arka”, and after that, the two were inseparable. Arka would carry messages for Emily, and helped her find ingredients for her cooking.

Shortly before Emily reached the age of maturity, her mother fell extremely ill and succumbed to the disease in a short time. When the Great War came to their lands, her father and all 4 brothers fell to the warriors of the evil sorceress Vitrollia, leaving Emily alone in the world, with the exception of Arka.

She wandered, giving food to those in need, until one day, she came across a young centaur warrior/blacksmith who was weak with hunger. She swiftly made some stew and bread, and stayed by his side until he was strong again. He introduced himself as James, and looked at her with affection as he said “And you are my Miracle“. Emily smiled widely, for the Elvish word for Miracle was the secret name she was given at birth by the faery. She knew then that she loved him, and the two were married shortly after. James worried that they would never be able to have children, for he knew that even trying would kill Emily, but she always just smiled and told him not to worry. “The gods will bless us“. 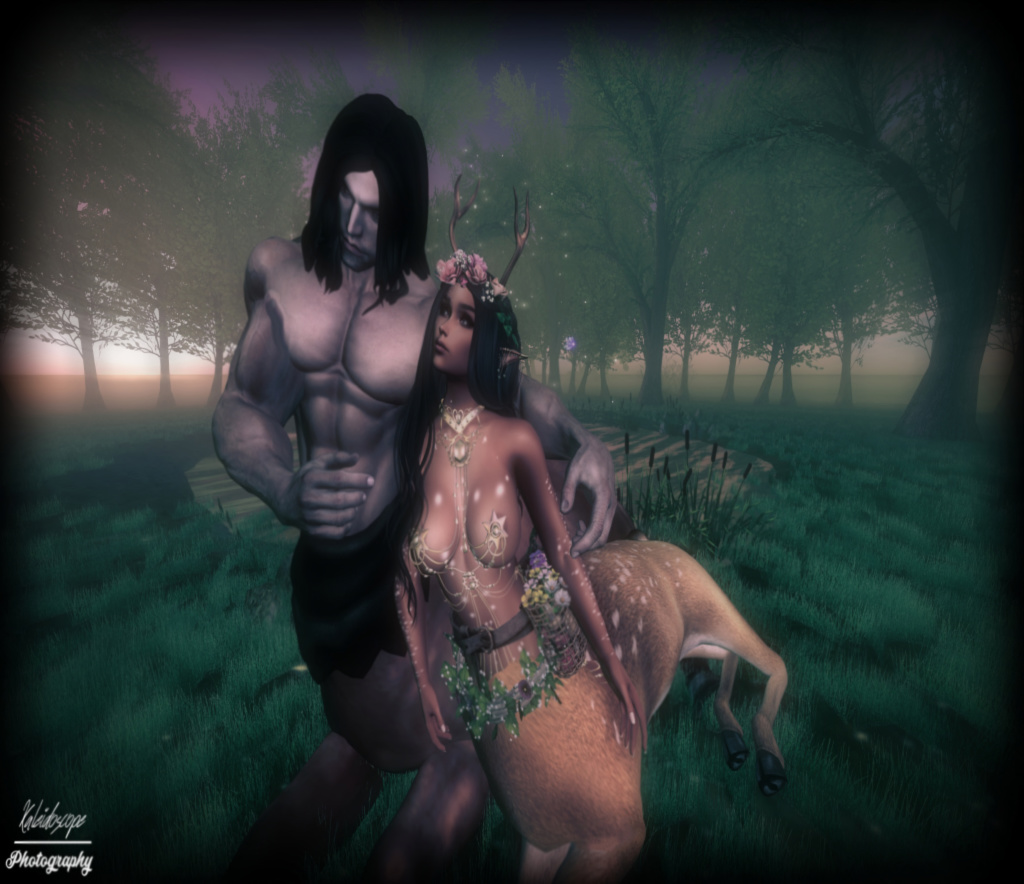 Eventually, the two found their way to Centauria, and made a home not too far from the main part of the kingdom. After meeting the Queen Julala, Emily became leader of House Cloudbirth, and the head chef.

Shortly after, they came across a male centaur foal, alone in the world, and Emily insisted they take him in and raise him as their own. “He has no parents. He needs us, my love.” James offered no argument, and Rayven became their first adopted child.

Years later, after Rayven was grown, three other grown centaurs found them at different times. They too were alone in the world and needed family, so Emily and James took them into their family as well. Emily smiled at James “Did I not tell you that the gods would bless us with children?” She then smiled at her adopted children “Rayven, Byzeern, Ailbhe, and Humoormi, I love you all, and I will always be here for you.” She knew, after the losses she had suffered, that she had found her home and her family, until the end of her days.