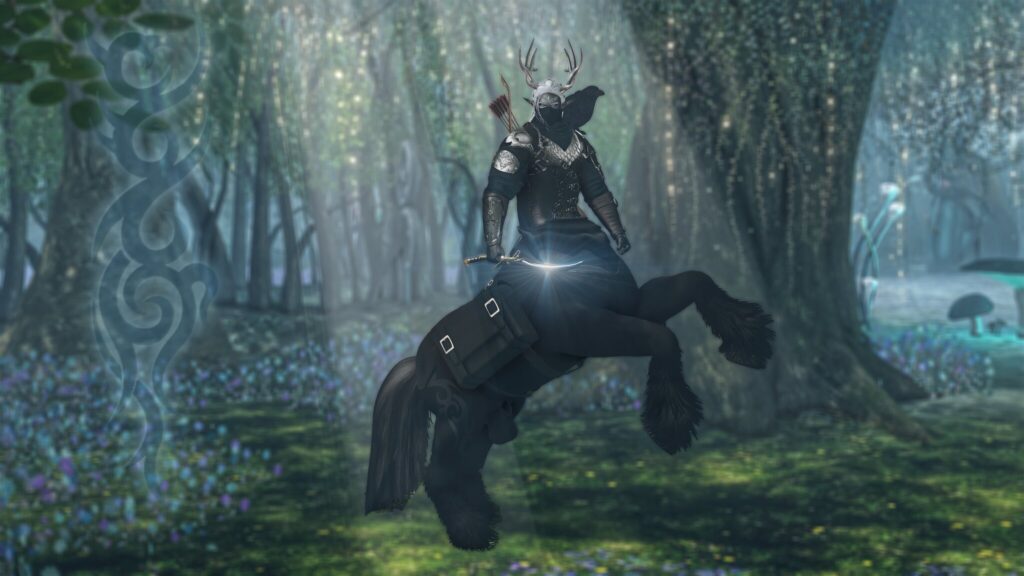 A Ranger’s Tale: The Story Of Rayven

What am I? A question I have been asking my entire life yet the answer always eludes me. So instead, let’s start with who I am. My name is Rayven Firebrand. I am a ranger, and I roam the wild lands in search of my people. I am taur and that’s all I know.

My story begins at the point of my earliest memory. I was but a small foal who had lost his parents and there were none of his people to speak of anywhere. It was after the time of Vitrolia, but there were still small remnants of her evil reign skulking about the land. Much to my dismay, because one day I ran afoul of some while wandering around in search of my family.

I was lost and alone. I tried to make myself hidden but it was too late. They spotted me. I fled as they pursued trying my best to maneuver praying my tiny form would make me hard to catch. But oh how tired this was making me. They laughed maniacally as they chased me. It was fun for them. Chasing a small foal with murderous intent was fun.

I finally found refuse in a small space just big enough for me. I was thankfully out of their reach. Not that they didn’t try for a very long time. As fear gripped me that soon my luck would run out I began to cry. I thought maybe my tears appealed to their better nature when they suddenly fled. It was at this moment I saw my rescuer in the angelic face of a young cervitaur.

Emily was her name but I would soon know her as mother for she was the only one I have ever remembered. She found me scared, crying and alone, and insisted to her husband, James, that they should raise me as their own. I was saved. The two of them raised me and taught me many things.

Mom attempted to teach me the healing arts but I could never fully master those. No; Dad,  however, was a mighty warrior. He taught me a warrior’s skill. To make sword and spear a true extension of my very being. He also taught me how to shoot a bow and hunt game and provide for my family. Yet he also taught me the smith’s trade for he always told me that you must learn how to create as well as destroy.

They also insisted that I go to school. It is from there that the seeds of the most pressing mystery of my life first took root. What am I?

School wasn’t terribly difficult nor was it easy. I wasn’t a bad student. In fact I received very high marks. I excelled in languages, mathematics and sciences. Thanks to my dad I was also a pretty good athlete. It also helped that I grew to a massive size rivaling that of my father. Although that didn’t stop me from getting into fights. Several fights. Life can be rather tough when you stick out like a sore hoof as much as I do. Allow me to explain…..

Let us begin with the most obvious part of me, my skin. My skin is as black as a patch of midnight that goes on for eternity. That, and my hair is as white as a blanket of fresh snow. Between those and my pointed ears, you would think Drow. If only it were that easy however I would be just another drowish taur and we could leave it at that. Then you see my antlers which will lead you to believe drowish cervitaur.

But again you would be wrong, because my antlers are unlike others you have seen. They are, for lack of a better word, silver and with their near metallic quality it becomes obvious that they are not as you would expect. Adding that with the fact that my lower half is of an equine instead of a cervine things begin to look strange. And that’s when you notice that I have cloven hooves and you at first think unitaur. That is until you remember my antlers, but the crown jewel of me is my most distinguishing feature. My eyes which are as blue as sapphires yet they glow as bright as any star in the night sky. Mix all of these things together and it results in the one question that has overshadowed my life in its entirety. What am I?

The need to solve the mystery that is me has led me to venture out into the world. It’s seemed a good idea at the time but I proved that I was certainly not ready to the world at large. Many times I went out and many times I came back home with injuries or infections that needed mom’s healing or I would manage to trespass on some creature that dad had to save me from. Each day I was either healed by mom and or bailed out by dad. On and on the cycle went until finally mom and dad conceded to the fact that they will never stop me, so instead they thought it best that I learned a ranger’s skill to better prepare me for the wild. They enlisted the help of the finest ranger in all of Centauria.

Soon my apprenticeship began, under the watchful tutelage of an elven ranger by the name of Aelathorn. A wise, graceful and strong Sylvan elf he is. Through him I learned to commune with all creatures great and small. Also how to speak and connect with all the fae. He taught me to identify every plant, flower, tree and shrub all around me. How to track and to keep from being tracked. To never rest in the same place twice while out in the wild lands and to always to be aware of what territory I am treading. I learned languages and mannerisms that even the school knew nothing of.

For years I learned from master Aelathorn until the day had come that he deemed me ready. I am now a ranger.

Now when I go out in the wild lands and return it is not to be healed or rescued. It is to be with my family that by now has grown. I have three more siblings whom, along with my parents, mean the world to me. A brother by the name of Byzeern and two sisters, Ailbhe and Humoormi. However, as much as my family fills my heart with love and happiness there is still one question that forever gnaws at me. What am I?

The Arrival Of Moki

It has been years since my apprenticeship to master Aelathorn. I spend most of my time exploring the wild lands looking for the slightest clue to my very existence. I have traveled west to the sea and as far north as the plains beyond the borders of Centauria. I have spoken to all manner of man and beast and yet am no closer to my truth. But one thing is for certain though, I love it here in the wild lands. Between these lands and my family I almost forget my reason for being out here…

…Almost, but I digress.

It is a day like any other day. I see animals that I try to safely avoid, and talk to a number of passersby trying to make a safe passage through the forest. Nothing strange or out of the ordinary. Just the typical false leads who claim to see others of my kind but ultimately end up in fruitless pursuits. As per normal I stop to rest under a tree and pull out a large piece of jerky and bread from my satchel and some mead from my skin to wash it down. And that’s when I heard it.

I look around me and behind the tree I was leaning against and saw nothing.

“Who’s there?” I said. “I can hear you! Show yourself or feel the bite of my blade!”

But there was nothing. I peer around and yet saw nothing out of the ordinary. So I shrugged it off and pulled out a second piece of jerky. Suddenly I hear it again but louder this time.

I look down toward my hooves and see a small and adorable little creature staring up at me sniffing at the air. An unusual little thing this creature is. I have never seen something of the like in all my life. It was white with blue eyes (similar to my own but didn’t glow). It also had… Quills. Yes quills flanking either side of its body and a ridge of large spikes the length of its spine which lead to a tuft like protrusion at the end of it’s tail.

If that wasn’t strange enough the quills, spikes and tuft felt almost crystalline like and they glow.  Bright blues greens and purples. An amazing little creature this thing is, but where did it come from and why is it here?

The latter question soon became apparent as its gaze locked on the piece of jerky in my hand.

“Are you hungry?” I asked and tore off a small piece of my jerky.

As I reached out toward the creature it did the cutest little flip in the air then stood on its hind legs. I gave warning as I fed the piece of jerky to the creature.

“This may be too spicy for you. I like my jerky with bite.” A warning that quickly proved useless as it ate the jerky happily and reared up to beg for a second piece.

“You need a name,” I declared and at that point it made a little squeaking sound that sounded almost like it was saying, “moki.”

At that the little creature did this happy little dance and went on to eat the second larger piece of jerky I gave it. From that day on, Moki has not been far from my side. Where it goes is anyone’s guess because I refuse to tame it and keep it as a pet. Moki comes and goes at will as is its way.